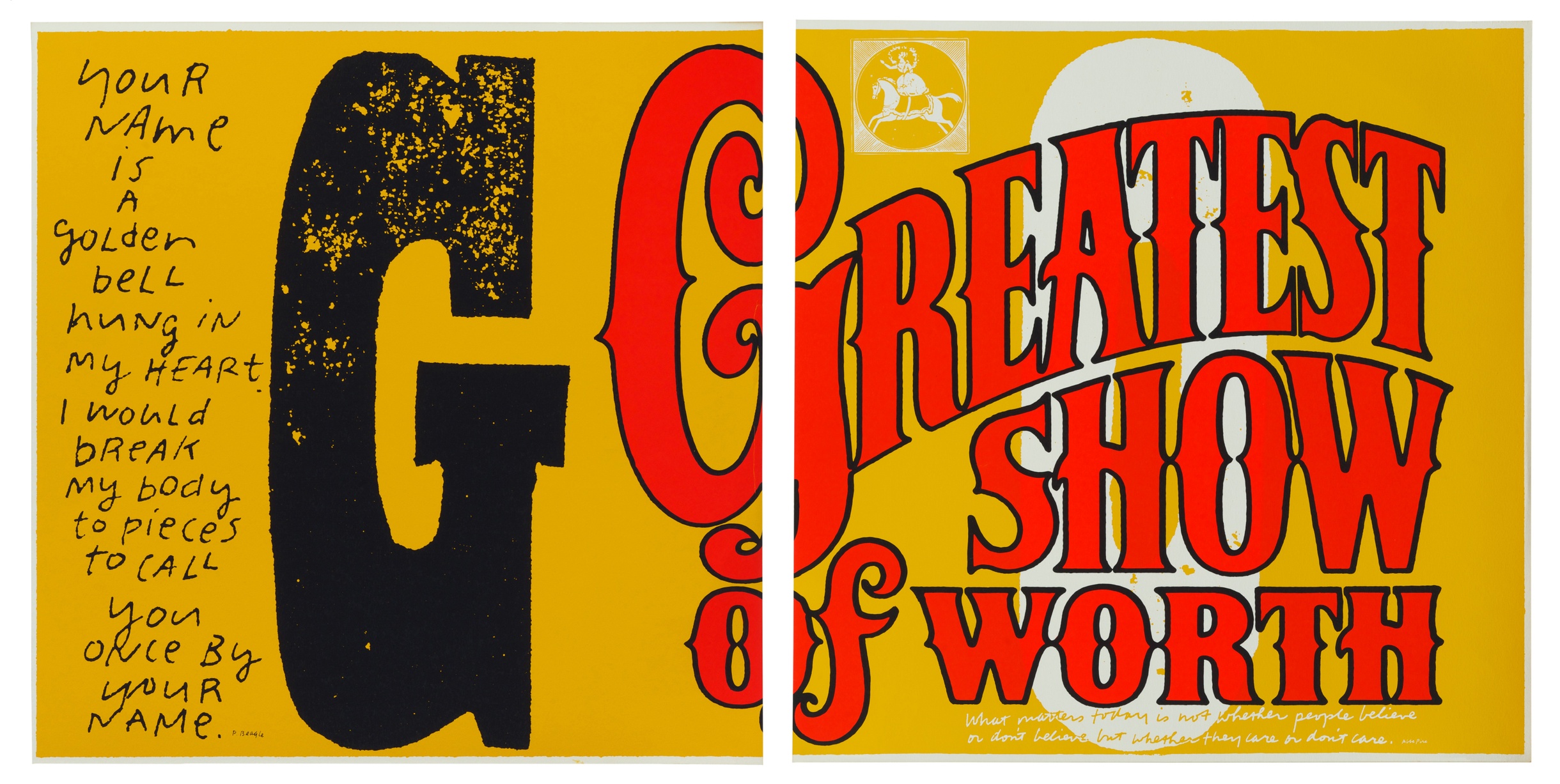 Artist and one-time Roman Catholic nun Corita Kent is perhaps best known for her bold and colorful prints that carry inspiring and uplifting messages. A prime example is Kent’s 1968 circus alphabet series. For each of the twenty-six letters in the English alphabet, Kent made a serigraph that featured a variety of symbols: playbill fonts, the big top tent, a hot air balloon, and iconic circus performers, including an equestrian vaulter, clowns, trapeze artists, tightrope walkers, and trained animals. In her usual fashion, she paired these images with the activist, literary, lyrical, and poetic words of luminaries such as Joan Baez, e.e. cummings, Albert Camus, Fyodor Dostoyevsky, Adlai Stevenson, Rainer Maria Rilke, and Theodore Roethke, among others.

As bright and playful as the circus alphabet is, Kent’s notes and research materials for the series reveal that she was thinking about the circus in a more serious light. She kept a collection of circus-themed articles and poems torn from magazines and copied from books, including an essay by Franz Schneider for the Catholic magazine America.(1) Kent heavily underlined and scribbled notes in the margins of Schneider’s essay, which draws parallels between the circus clown, the Christian, and the human race. “Like the clown,” he writes, “[man] is without identity and without defense against the inhuman forces that surround him.” Perhaps the most poignant line for Kent, however, is a string of words that she marked with an arrow: “the circus as an expression of a spiritual hope in something as yet unrealized.”

The G and O prints are exemplary of how Kent captured the joys and sorrows of the circus. On the left side of G is a handwritten quote from Peter S. Beagle’s 1968 fantasy novel, The Last Unicorn: “Your name is a golden bell hung in my heart. I would break my body to pieces to call you once by your name.” On the right side of G is a cropped sliver of the Ringling Bros. and Barnum & Bailey slogan, “The Greatest Show on Earth,” which then continues onto O. However, Kent manipulated the slogan from “on Earth” to “of Worth.” Handwritten words along the lower edge of O cite the 1958 Nobel Peace Prize–winning Belgian-Dominican friar Georges Pire (known as Abbé Pire): “What matters today is not whether people believe or don’t believe but whether they care or don’t care.” When viewed separately, each print contains text that can be interpreted as a visual element or as a play on words. When joined together, they offer an entirely new way of looking. By adding and shifting the way we see the letters and words, Kent’s own message of circus-borne hope becomes clear: Go—show your worth.