Someday is Now:
The Art of Corita Kent

Someday is Now: The Art of Corita Kent is the first full-scale survey of more than thirty years of work by artist and designer Corita Kent (1918–1986). A teacher at Immaculate Heart College in Los Angeles and a civil rights, feminist, and anti-war activist, Corita, as she is commonly referred to, was one of the most popular American graphic artists of the 1960s and ’70s. Throughout her rich and varied career, she made thousands of posters, murals, and signature serigraphs that combine her passions for faith and politics. Reflecting larger questions and concerns of the 1960s, her images remain iconic symbols of that turbulent time. Corita’s earnest, collaborative approach to art-making — combining faith, politics, and teaching with messages of acceptance and hope — continues to be a potent influence for many artists working today.

In 1946, Corita began teaching art at Immaculate Heart College, where she fostered a creative and collaborative arts community and developed a life-long interest in printmaking. At IHC, she developed her hallmark mixture of bold, bright imagery and provocative texts that she extracted from a range of cultural sources, including: advertising slogans; street and grocery store signage; poetry; scripture; newspapers and magazines; philosophy; theological criticism; and song lyrics. Her ingenious textual amalgams mix the secular and religious, popular culture and fine art, pain and hope, and include quotes from a range of literary and cultural figures such as Samuel Beckett, Albert Camus, e. e. cummings, Langston Hughes, John Lennon, and Gertrude Stein. With an ear for language rivaling that of her contemporary Ed Ruscha, Corita proclaimed her upbeat theology in prints that re-purpose well-known advertising phrases of the time such as “The big G stands for goodness” (General Mills) and “Put a tiger in your tank” (Esso gasoline). As theologian and friend Harvey Cox noted, “She could pass her hands over the commonest of the everyday, the superficial, the oh-so-ordinary, and make it a vehicle of the luminous, the only, and the hope filled.”

For Corita, printmaking was a populist medium to communicate with the world around her, and her designs were widely disseminated through billboards, book jackets, illustrations, posters, gift cards, and T-shirts.

As she explained, “It [printmaking] enables me to produce a quantity of original art for those who cannot afford to purchase high-priced art. … The distribution of these prints to everyday places of work pleases me, and I hope they will give people a lift.” This activist spirit permeated Corita’s life. Her posters and murals asked philosophical questions about racism, poverty, military brutalities in Vietnam, and conflicts between radical and conservative positions inside the Catholic Church. Works such as 1969’s manflowers touch directly on the brutalities of the war in Vietnam. In the print, Corita juxtaposed the texts “man power!” and “Where have all the flowers gone?” against an image of two injured young soldiers and bright green and purple blocks of color. Speaking to her aim to address the stark realities of the world with messages of hope and joy, Corita explained: “It is a huge danger to pretend awful things do not happen. But you need enough hope to keep on going. I am trying to make hope. And you have to grab it where you can.”

While several exhibitions have focused on Corita’s 1960s serigraphs, Someday is Now is the first major museum show to survey her entire career, including early abstractions and text pieces as well as the more lyrical works made in the 1970s and 1980s. The exhibition includes over 200 serigraph prints, as well as rarely exhibited photographs Corita used for teaching and documentary purposes. It will be accompanied by a comprehensive catalogue featuring new scholarship, interviews with former students and collaborators, and responses from a wide variety of artists, curators, and designers.

Someday is Now is organized by Ian Berry, Dayton Director of the Tang Museum, and Michael Duncan, independent curator and art critic, in collaboration with the Corita Art Center in Los Angeles. The exhibition is made possible with the generous support of the Andy Warhol Foundation for the Visual Arts and the Friends of the Tang.

Someday is Now will be on view at the Museum of Contemporary Art in Cleveland, Ohio, from June 6 through September 14, 2014; the Baker Museum in Naples, Florida, from September 27, 2014, to January 4, 2015; the Andy Warhol Museum of Art in Pittsburgh, Pennsylvania from January 31 through April 18, 2015; and the Pasadena Museum of California Art in Pasadena from June 14 through October 11, 2015.

Anchor name: Interview
Tang in the News:
Ian Berry on All Things Considered

Ahead of the January 31, 2015, opening of the Tang Teaching Museum’s traveling exhibition Someday is Now: The Art of Corita Kent at the Warhol Museum in Pittsburgh, NPR’s All Things Considered produced a feature on the artist that includes an interview with Ian Berry, the Dayton Director of the Tang and a co-organizer of the exhibition.

You can listen to the story here or visit the All Things Considered story page.

A Nun Inspired By Warhol

Someday is Now:
The Art of Corita Kent

Someday is Now is organized by Ian Berry, Dayton Director of the Tang Museum, and Michael Duncan, independent curator and art critic, in collaboration with the Corita Art Center in Los Angeles.
twtweet this
fbshare on facebook 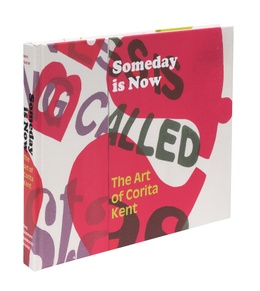