As an academic, as a woman who studies art history and architectural history, as a scholar, as a black woman: those worlds collided when I saw Carrie Mae Weems’s When and Where I Enter the British Museum. It derailed me, and I had to take a moment to reflect on why this image spoke to me so strongly.

I visited the British Museum four years ago. It’s a treasure trove of history. I saw Assyrian lions that guarded the gates of ancient cities that no longer exist. I saw busts of pharaohs, Roman replicas of Greek originals. I saw the Elgin Marbles. I sat in front of the Rosetta Stone for a very long time thinking about how we decoded hieroglyphics. And while I was looking at this history of the world and feeling so blessed and happy that I had the opportunity to do so, I started to feel this slight contradiction. Why were the Elgin Marbles in London? It started to feel like the British Museum was more of a monument to British imperialism.

I was feeling this weight on me like I should not be enjoying all of these things. All of these things should not be here. Why are they here? Why aren’t they in their home countries? What was the situation when the British Museum acquired these pieces? Were they “stolen”? Were they acquired during a time when the British were ruling over a particular territory? If we’re thinking about ourselves living in a postcolonial moment, I’m wondering, what does that mean? Should we be doing repatriation of these works back to the places where they came from? Should the Rosetta Stone be here? Should it be repatriated back to where it was found? Or does the Egyptian government not have the resources? And does the British Crown owe anything to these countries?

When I saw When and Where I Enter the British Museum and then I thought about the title, it brought so many of those memories back, and it made me question what my position was within this institution, and what that meant as a woman, as a black woman, as an American. Because the title is saying, “When and Where I,” not “When and Where You,” or not “When and Where We Enter the British Museum,” it is instantly personal. Yet still it’s accessible for someone like me. I can connect to that. I felt like she hit the nail on the head when thinking about your own position, or my own position, within this larger institution.

The poetics of the image in a formal way are really important—how she situates herself in the frame, how she directs our eyes. We see Carrie Mae Weems as the silhouette against all the other action in the image. We have this deep portion of the pavement that leads us, that gives us this sense of directionality into the entrance. But she is isolated. Does she want to enter? Does she not want to enter? Why does it feel like she’s questioning that decision? There is ease with which everyone else around her is moving. I can feel a flow of movement there, but then a stillness within her. The frame propels us to want to move forward. But there’s something within her that is giving us pause. She’s giving us pause. She’s contemplative of this relationship to this institution. She’s able to capture this nonchalance of everybody else in the piece, while she is having a serious study of this thing that she’s about to do. There’s a momentum, a weight, an energy, to what’s about to happen, if she does decide to enter.

I appreciate Weems for giving us that space, for being okay to show that distance with the institution. It lets me know that I’m not alone in this kind of struggle with owning the institution, or owning the canon, or owning this art or design history as my own, as something that I can possess. It’s relieving. It’s reassuring. It’s okay to not necessarily feel like this full history is for you or speaking to you in a direct way, and it’s okay to question the canon.

That is the kind of pause that I can take only with a greater understanding of the global history of architecture or the global history of art, a greater understanding of how colonialism and imperialism shaped our collections, our knowledge base, what we consider to be the best-of-the-best high art. We have to be knowledgeable of that narrative. And the British Museum is definitely a purveyor of the Western canon. It perpetuates the notion of a dominant story just by its existence. Everything within it leads to this idea of an ancient civilization and a progression of history. It’s such a rich collection. You cannot deny it. To deny this collection would be to deny yourself the history that’s held in this building.

This image encapsulates part of the African American experience, trying to understand your place within these larger themes. This is an example of experiencing issues with institutions and power, this negotiating your identity with the established canon, with the things that you’re supposed to love and appreciate, but sometimes you have to do so at a distance. 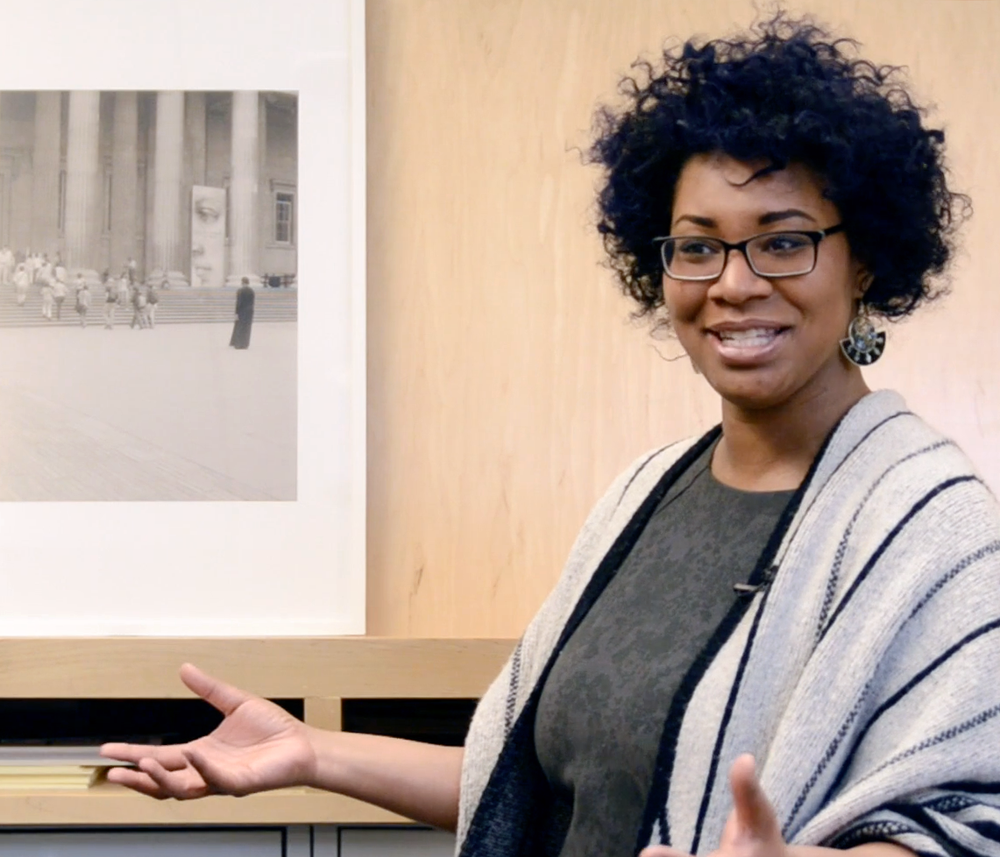 About the Author
Amber N. Wiley, Assistant Professor of American Studies at Skidmore College, received her PhD in American studies from George Washington University. She specializes in architectural history, urban history, and African American cultural studies. Her research interests are centered on the social aspects of design and how it affects urban communities—architecture as a literal and figural structure of power.

When and Where I Enter
Exhibition
i
Pattern by Jonnea Herman ’18
Inspired by the annual February Tang <3 Students Event
The Tang Pattern Project celebrates the Museum’s 20th anniversary. Organized by Head of Design Jean Tschanz-Egger, past and current Tang Design Interns created patterns inspired by the Museum’s exhibition and event history.
See all patterns