Late in 2016, in an informal chat with Dayton Director Ian Berry, I described a new course I was designing for the following semester, “Black Studies, Sound, and Technology.” Noting the centrality, in my conception of these three intersecting topics, of Sun Ra (1914–1993), the legendary composer, bandleader, keyboardist, poet, and philosopher widely credited for inaugurating Afrofuturism, I expressed an interest in connecting the course to the museum, as I have done, in smaller or larger ways, with most of my courses at Skidmore. Little could I imagine that, in scarcely a month, I would be in Chicago with Ian and his longtime art-world friend John Corbett, a central figure in writing about and preserving Ra’s legacy and archive, sitting at a table piled with material from that archive, which Corbett and his wife, Terri Kapsalis, ultimately gifted to the museum.

Sun Ra Archive
Artist Collections
In the week before the spring 2017 semester started, when it became clear that my students would be able to work with this stunning trove of Sun Ra material, I overhauled my syllabus to place it at the heart of the course. As the semester progressed, the project grew in scope into a three-part curatorial endeavor. First, working with my students, we collaboratively selected material from the Sun Ra archive for an exhibition, Art Forms of Dimensions Tomorrow: Sound, Black Study, and the Multidisciplinary Artist. Students individually wrote short catalog essays about many of the pieces, drawing on theoretical, historical, and analytical perspectives from the course. Most centrally and most satisfyingly, the exhibition became the occasion for placing contemporary artists in conversation with Ra’s legacy—with the Tang, I organized a two-day music festival featuring five multidisciplinary artists. And, as an additional entrée for the public to experience Ra’s music and the museum’s recent acquisitions of his ephemera, I was soon also curating a Sun Ra “mixtape” for the museum’s Elevator Music series, which bridged his better-known Arkestra work with some lesser-known contributions as poet, teacher, and sonic experimentalist. Working into the summer to dub student-created radio broadcasts onto cassette tapes for a second phase of this elevator exhibition, I found that the project’s resonance and interest for me far exceeded even the ambitious classroom experience it began as: it offered me an opportunity to connect my interests as a scholar to the broad public audience provided through the museum. 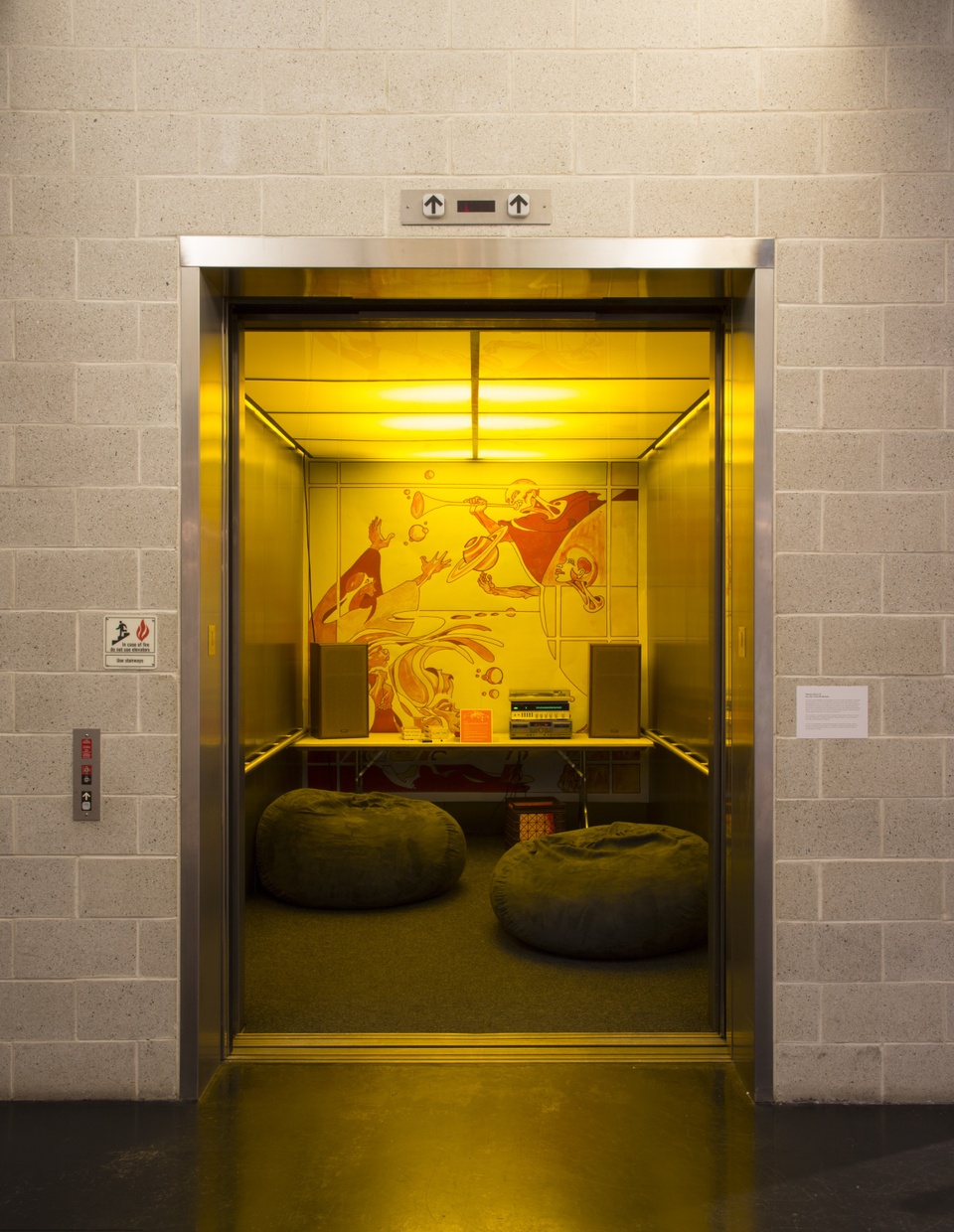 Though Ra’s influence on a now-ubiquitous Afrofuturist aesthetic and on the musical underground are well understood, I chose to focus my curatorial choices on two underappreciated facets of Ra’s work:  its multidisciplinary blending of varied media and its articulation of the study of black life in a newly imaginative, critical, and personal mode. This meant placing the Ra archives in dialogue with contemporary works from the museum’s collection by Terry Adkins, Ouattara Watts, and Tim Rollins & K.O.S. in Art Forms of Dimensions Tomorrow. These works interlinked with one another and with the Sun Ra archive because they all pay tribute to icons of sonic blackness associated with the same era in which Ra came to fame: Dr. Martin Luther King Jr. (in Rollins/ K.O.S. and Adkins) and Jimi Hendrix (in Watts and Adkins). Hendrix brought to mainstream popular culture the electricity, noise, and dissonance that Ra had practiced underground; the revered civil rights work of Dr. King also comes to us first and foremost as sound. King’s words are archived as oratory, his martyred memory bound up not only with a dream, but with a speech act that conjures and projects that dream. If Hendrix bent the musical legacy of the blues guitar to new modes of subjectivity and liberation, King brought the oratorical tradition of the black church into a new form of politics. Like Sun Ra’s album covers, these contemporary artworks all place visual abstraction in the service of an urgent injunction: to listen to the black past and hear it anew.

In the spirit of these artworks, and of Ra’s constant focus on the future, the project could not be just an exercise in celebrating the past. Thus, a two-night festival of contemporary performance—by Kamau Amu Patton, Ephraim Asili, Chris Corsano, Joe McPhee, and Matana Roberts—honored Ra’s boundless intermedia practice and emphasized multidisciplinarity while centering sound and music: we heard filmmaker Asili spin records and musician McPhee recite his poems; we saw saxophones scream (McPhee and Roberts) and witnessed the raising of the archival voices of the dead from tabletops strewn with electronics (Roberts and Patton). Documentary video (Roberts and Asili) conjured the erasures and breakages of Afro-diasporic memory, while live soundtracks to those images sought to bring to our hearing those histories of a new, bold experimentalism. Deft musical dialogues between McPhee and Corsano suggested the ongoing relevance of the telepathic, energetic approach to acoustic improvisation that was central to Ra’s music, while the transportive waves of Patton’s homebuilt synthesizers suggested Ra’s promise of “space music” as a more widely accessible form of space travel.

In a fresh programming innovation, all five artists came together for an audio-recorded wide-ranging dialogue, a “hang” that ought to be a part of every festival. Each artist brought a vast well of knowledge and first-person experience of Sun Ra’s work (Asili even brought a few ultra-rare LPs), and their collective opinion and expertise on the subject took the conversation to places covered in none of the scholarly literature. Guest artists also engaged with classes, conversing about their work and ideas in settings enhanced by the museum’s concurrent installations. In one dialogue, my “Community and Radio” class and Berry’s “Inside the Museum” class—presumably strange bedfellows—met together with Asili and Patton. These two artists, active across these very different contexts for the display of their work, brilliantly connected these topics. One key insight from Patton: “Every museum should have a radio station.”

A key takeaway from the projects revealed itself when I spoke with Patton about his performance’s incorporation of archival audio of a Malcolm X speech (just as Terry Adkins’s Flumen Orationis uses audio of Dr. King): with the 1960s in the commemorative rearview, contemporary artists now find themselves increasingly in a position to use the 1960s’ black radical tradition—including Sun Ra’s work—the same way that Ra used ancient Egypt: as an unjustly under-appreciated past that implies an alternate future.

Originally published in Accelerate: Access & Inclusion at The Tang Teaching Museum 1 (2017)
About Adam Tinkle
Adam Tinkle received his PhD from the University of California San Diego and is now Visiting Assistant Professor of Media Studies and Documentary Studies at Skidmore College. A multidisciplinary artist and scholar committed to the cross-pollination of these domains, he focuses on auditory culture and sonic art, with particular interests in sensory immersion, inclusive participation, and paths to transformation.

Elevator Music 33
Up = Out: A Sun Ra Mixtape
Exhibition
i
Pattern by Erin Barry ’16
Inspired by the exhibition The Jewel Thief
The Tang Pattern Project celebrates the Museum’s 20th anniversary. Organized by Head of Design Jean Tschanz-Egger, past and current Tang Design Interns created patterns inspired by the Museum’s exhibition and event history.
See all patterns