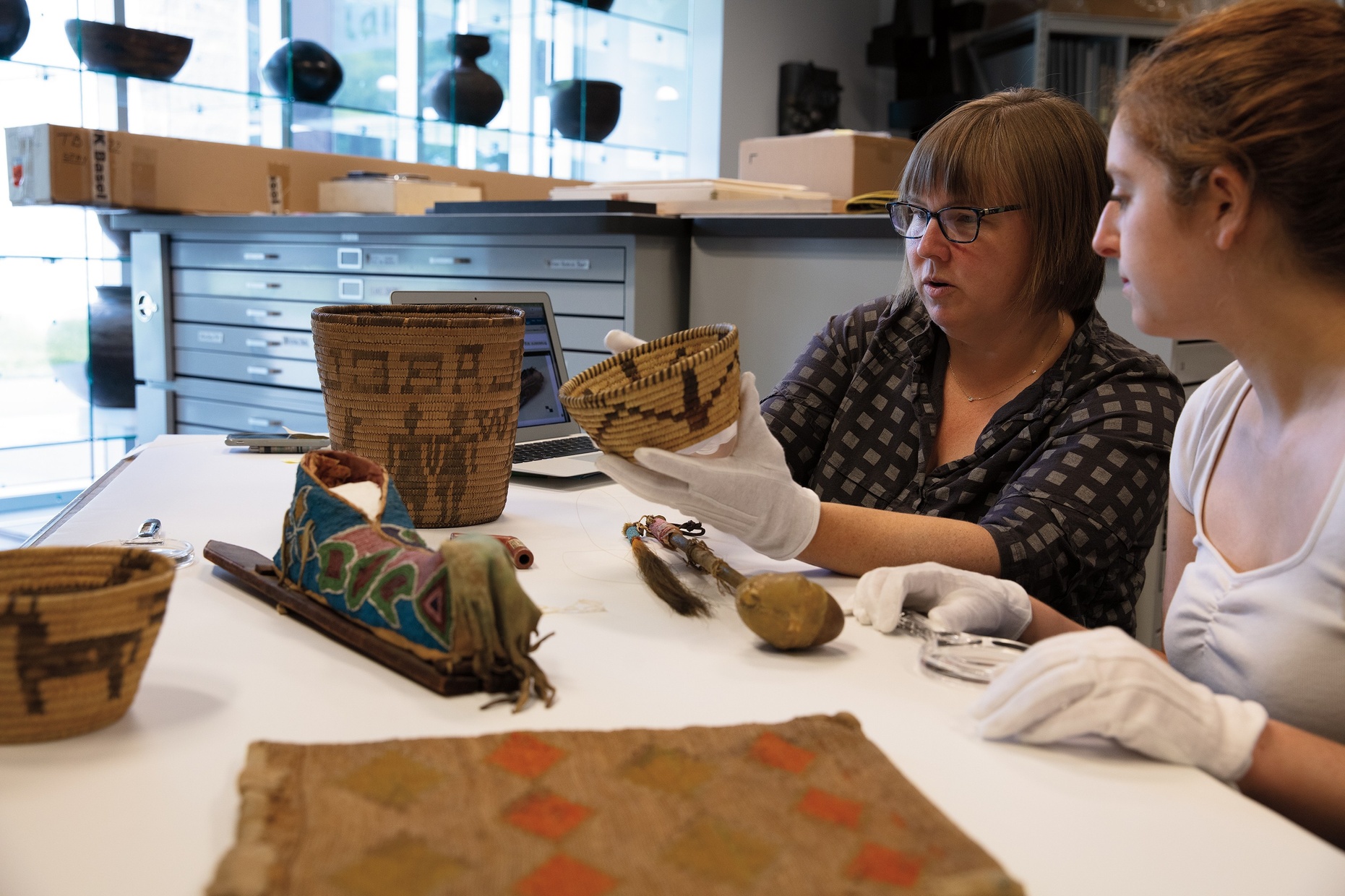 Associate Professor and Chair of Anthropology Siobhan M. Hart and Maisie Bernstein ’21 completed object-based research on Native arts from the Tang collection in order to verify or correct cataloging data and identify works that are subject to NAGPRA regulations.

In 1990, a decade before the Tang Teaching Museum opened its doors, the US Congress passed a law that fundamentally transformed the relationships among Native Americans, museums, and archaeologists. The Native American Graves Protection and Repatriation Act (NAGPRA) establishes a process for museums to repatriate Native American human remains and certain kinds of objects to the most closely culturally affiliated Native American tribe(s) or Hawaiian organizations. NAGPRA was heralded as human rights legislation for its advancement of intercultural reparations and cultural property law.

Museums and Native American communities have been grappling with implementation since 1990. Native American elders, spiritual leaders, and representatives have been traveling to museums to share and gather knowledge about collections, sometimes hundreds or thousands of miles away. They are reviewing and responding to information provided by museums and sometimes contesting a museum’s determination of cultural affiliation. And they are doing the difficult work of preparing for the return of ancestors, sacred objects, and cultural patrimony, all while confronting the insidious consequences of colonialism that necessitated the law in the first place.

Museum professionals in all kinds of settings—art museums, culture and history museums, historical societies, libraries, universities—have been verifying and updating catalogs and inventories, researching objects sometimes acquired a century or more ago, and consulting with Native American tribes. My first job post-college was as a curatorial assistant at Harvard’s Peabody Museum of Archaeology and Ethnology working on a NAGPRA inventory, and I continued repatriation work for eight years in graduate school. As an archaeologist trained in the post-NAGPRA era, I have experienced the difficult, slow, and labor-intensive work of repatriation. It is transformative for individuals and communities and absolutely necessary for institutions with commitments to inclusion and decolonizing.

In summer 2019, Maisie Bernstein ’21 and I worked with over a hundred artworks from the Tang collection made by Native American artists. We focused on improving the catalog through object-based research, identifying whether any objects are subject to NAGPRA, and beginning the process of identifying source communities. We essentially constructed a biography of each object drawn from archives, scholarship, the object’s attributes, and similar objects in other museums—teasing out who made it, how and when it was made, who it belonged to and who possessed it over time, how it ended up in the Tang collection, and who the museum might engage for repatriation or collaboration in the future.

We learned that some artworks, including pottery made by Puebloan artists from the American Southwest, war clubs made by Native artists in the Great Plains, and textiles woven by Diné (Navajo) artists were already in the possession of the Skidmore College Art Collection (which formed the foundation of the Tang collection) when NAGPRA was enacted, having been gifted by Skidmore’s biology department and Professor Emeritus Dr. Sonja Karsen. Later, in 2007, the Schenectady Museum & Suits-Bueche Planetarium gifted thirty-one Native American objects. The Schenectady Museum acquired the mostly basketry, beadwork, and leatherwork between 1930 and 1970 from local and regional collectors and through exchanges with other museums. The growing scrutiny to develop provenance and increased sensitivity around the ethics of collecting antiquities (brought about in part by NAGPRA) led some late twentieth-century collectors to focus on contemporary works produced for the art market. This included collectors like Moreen O’Brien Maser ’26, Susan Rabinowitz Malloy ’45, and Dr. Grace Swanner, who would each make gifts to Skidmore and the Tang.

Some objects are extensively documented, with appraisals, detailed provenance, and fastidious collector notes. Swanner, a Saratoga Springs physician who collected crosses from around the world, kept an index with notes on how, where, and when she acquired pieces, along with sketches and descriptions. In one instance, she describes purchasing an “Eskimo ivory cross” made by a King Island Inupiaq artist at Kotzebue, Alaska, in 1965. These details flesh out the story of how, when, where, and by whom this object was created and how it came to be possessed by Swanner and later, the Tang. The artist’s name is not recorded and we are left to wonder why, especially when the collector recorded the names of other artists and witnessed its manufacture firsthand.

NAGPRA compels museums to engage in a technical process of consultation, decision making, reporting, and in some cases, repatriation. This hinges on an accurate catalog. When framed as part of a technical process, cataloging can seem neutral—it is, of course, what curators and collections managers do as part of their daily work. But object-based research and cataloging is more than empirical description using standard categories and widely accepted lexicons. It is storytelling. It has a point of view and a message about what knowledge is valued, recognized, and recorded. Like exhibition and label text in a gallery, the museum vernacular employed in database fields and classifications can be empowering or disempowering for Native communities.

For instance, a typical art museum catalog includes a field for artist name, but many Native American artworks are identified as “Artist Unknown” or only by culture are–“Plains” or “Southwest.” It is not necessarily true that the artist was not ever known. Rather, the artist was not recorded. Perhaps this was because the most significant thing about the work to the art dealer or collector was that it was “Indian” or from a particular region or community (as may have been the case with Dr. Swanner’s Inupiaq cross). Or, maybe signing one’s work was not considered appropriate in the source community, or the artist was identifiable by means other than signature, such as design, style, materials, etc. The linguistic choice made by the Tang and other institutions to instead use the phrase “Unrecorded artist” shifts the story told about the object, its creator, and the sociopolitical context of its production and circulation. It also opens up the possibility of learning more in the future. For example, a basket with a boat design came to the Tang from the Schenectady Museum with the attribution “Artist Unknown” and “Plains.” The geometric designs, canoe motif, and closely twined cedar bark and dyed grass indicate that the artist was most likely from a Nuu-chahnulth Native community on the Pacific Northwest Coast. We updated the artist attribution to “Unrecorded Nuu-chah-nulth artist.”

Another example comes from Swanner’s cross collection. The collector’s index states that an “Indian Cross set with six corals” was handcrafted by W. Hammerstrom (from whom Swanner purchased several pieces at a 1981 Saratoga Springs craft fair). However, the cross has a name stamped on the reverse: “Myra T. Qualo.” Swanner attributes several Native-style crosses to Hammerstrom, but we were unable to uncover any evidence that W. Hammerstrom was from a Native American community. But Myra Tsipa Qualo was. Census records state that she was a member of the Zuni Tribe living at Zuni Pueblo and identify her as “beadworker” in the 1940s. Our research allowed for an acknowledgment of her artwork and community membership. And though we cannot be certain about W. Hammerstrom’s identity, this case is also suggestive of the appropriation of Native American styles by non-Native artists that is all too common.

Geographic attributions of state and country also tell stories about sociopolitical relationships and colonialism. Native American tribes are sovereign but are also domestic, dependent nations. Some reservations and tribal lands are within the bounds of a single state, while others straddle multiple states. State names listed in a collections management database can be useful as search terms, but recognizing the territorial sovereignty of tribal lands and their position as dependent nations in a colonized context is also critical. Using the database’s “State” field (rather than a smaller-scale unit like “City” or “Neighborhood”) to record tribal land or reservation location recognizes both the sovereignty of Native nations and their current position as dependent states in a colonized place. Furthermore, using “United States” or “Canada” in the country field recognizes the colonial context of Native American art production for works produced since the late eighteenth century. Myra Tsipa Qualo’s cross, likely made at Zuni Pueblo between 1930 and 1980, is therefore identified as made in “Zuni Pueblo (New Mexico), United States.”

Myra Tsipa Qualo (1913 – 2008, Zuni Pueblo, New Mexico)
cross, c. 1930-1981
sterling silver, coral
Gift of Dr. Grace Swanner
1995.60
Our research and cataloging verified, corrected, and expanded the biographies of the works made by Native artists and began the process of restoring connections between these objects and their source communities. Fourteen works are identified as by named artists, including Ida Sahmie (Diné), Juanita C. Fragua (Jemez Pueblo), Dextra Quotskuyva Nampeyo (Hopi), Maria Martinez and Santana Roybal Martinez (San Ildefonso Pueblo), and Candelaria Medina Gachupin (Zia Pueblo). Eighty-five works are by unrecorded artists, but many are identifiable to one or more Native American source communities, such as the Nuu-chah-nulth basket. We determined that very few objects are subject to NAGPRA. Nonetheless, in the spirit of the law, the work to repair the harm done to Native communities lies ahead. Cataloging can be a step toward making visible the artists and communities made invisible through colonialism.
Originally published in Accelerate: Access & Inclusion at The Tang Teaching Museum 3 (2019)
About the Authors

Associate Professor and Chair of Anthropology Siobhan M. Hart’s research examines heritage practice, the politics of community recognition, and collaborative object-based research in the American Northeast. She is author of Colonialism, Community and Heritage in Native New England (2019) and coeditor of Decolonizing Indigenous Histories: Exploring Prehistoric/Colonial Traditions in Archaeology (2012) and Indigenous Archaeologies: A Reader on Decolonization (2010).