Collection Explore
Essay
The Dynamics of Form
by Rachel Roe-Dale

Humans have long used pattern as a means to understand and discern the behavior of the world around us. This exploration often leaves us debating whether patterns of design or behavior are inherent in a system under investigation or if we devise them as a means to understand the system’s behavior. Perhaps pattern’s origin is less important than the artistic and scientific beauty often uncovered in its pursuit. Sixfold Symmetry stages scientific and mathematical thought alongside artistic rendition, showcasing inherent, intrinsic patterns as well as premeditated, deliberate ones. Two of the disciplinary tools or perspectives I often use when investigating patterns as a scientist and mathematician, or that I harness to construct patterns, are algorithms and dynamic processes. The exhibition, through its interdisciplinary breadth, explores both of these ideas.

One pattern investigated in the show is the six-sided symmetry of the snowflake. The German mathematician and astronomer Johannes Kepler presented the essay, Strena seu de nive sexangula (On the Six-Cornered Snowflake) to his patron and benefactor, Johannes Matthaeus Wacker von Wackenfels, as a New Year’s gift for 1611. Kepler considers the origin of the snowflake’s intricate hexagonal structure: “There must be some definite cause why, whenever snow begins to fall, its initial formations invariably display the shape of a six-cornered starlet.”(1) Within his essay, Kepler looks for the agent of form, questioning whether the snowflake’s pattern is imposed by God or if the hexagonal form is inherent in the purpose it serves. Kepler seeks analogies in the construction of other natural forms, such as seed packing in a pomegranate or the hexagonal cells in a honeybee hive. These problems all apply to three-dimensional close packing, a concept still relevant in current explorations of molecular structures and orientation. His description of this phenomenon ultimately came to be known as Kepler’s conjecture. While close-packing theories continued to evolve in many contexts, Kepler’s conjecture was finally proven in 1998 by mathematician Thomas Hale using computational methods.

Kepler’s investigation of the origin and function of sixfold symmetry in the snowflake weaves science and art together in a way captured in the microphotographs of snowflakes by Wilson Bentley and the digitally derived Snowfakes by the contemporary mathematicians David Griffeath and Janko Gravner. Through these images we explore the intersection of science, including underlying design and composition, and artistic interpretation.

Wilson Bentley (American, 1865–1931), a farmer and amateur meteorologist from Jericho, Vermont, sought to capture the sixfold pattern of snowflakes in order to illustrate their uniqueness and transience. While we currently have a firm understanding of the molecular structure of water, its ability to hydrogen bond, and the manner in which ice crystals form, these properties were not well-defined in the late nineteenth and early twentieth centuries, nor had anyone devised a reliable way to photograph snowflakes. Bentley’s photographs were therefore revolutionary because of both their scientific and artistic qualities. Working outdoors in the frigid Vermont winter, Bentley used a microscope objective lens combined with a bellows camera to invent a novel photomicroscopic method to capture the ephemeral snowflake. Bentley first succeeded in photographing a snowflake with his apparatus in 1884. He recounted his experience that day to Mary Mullet in an interview for a 1925 article in American Magazine. Mullet transcribed Bentley’s words: “The day that I developed the first negative made by this method, and found it good, I felt almost like falling on my knees beside that apparatus and worshipping it! It was the greatest moment of my life.”(2) His collection of photographs exposed the huge selection of possible patterns and helped establish the premise that each snowflake is unique. Working with physicist William Humphreys, Bentley collected his photomicrographs in the volume Snow Crystals. His images displayed in Sixfold Symmetry capture the unique nature of underlying design–chronicling evidence for Kepler’s facultas formatrix (organizing principle).

To further investigate the formation of snow crystals and perhaps advocate for the ability to replicate natural, ordered beauty with deliberate, algorithmic design, Janko Gravner (Slovenia, b. 1960) and David Griffeath (United States, b. 1948) have produced computationally generated starlets, which they refer to as Snowfakes. Gravner and Griffeath’s algorithm can produce the more than eighty known types of snowflake crystals generated by nature and provides insight into the design and form of ice and other crystalline solids. In their model, Gravner and Griffeath use methods of cellular automaton, similar to those established in John Conway’s Game of Life,(3) to account for physical variables, such as temperature, pressure, and water vapor density, in order to model the diffusion, freezing, attachment, and melting actions of individual water molecules in a matrix of three-dimensional space.(4) Their model ultimately produces graphical images and videos of crystalline snowflakes as intricate, and arguably as artistic, as their natural counterparts captured by Bentley. 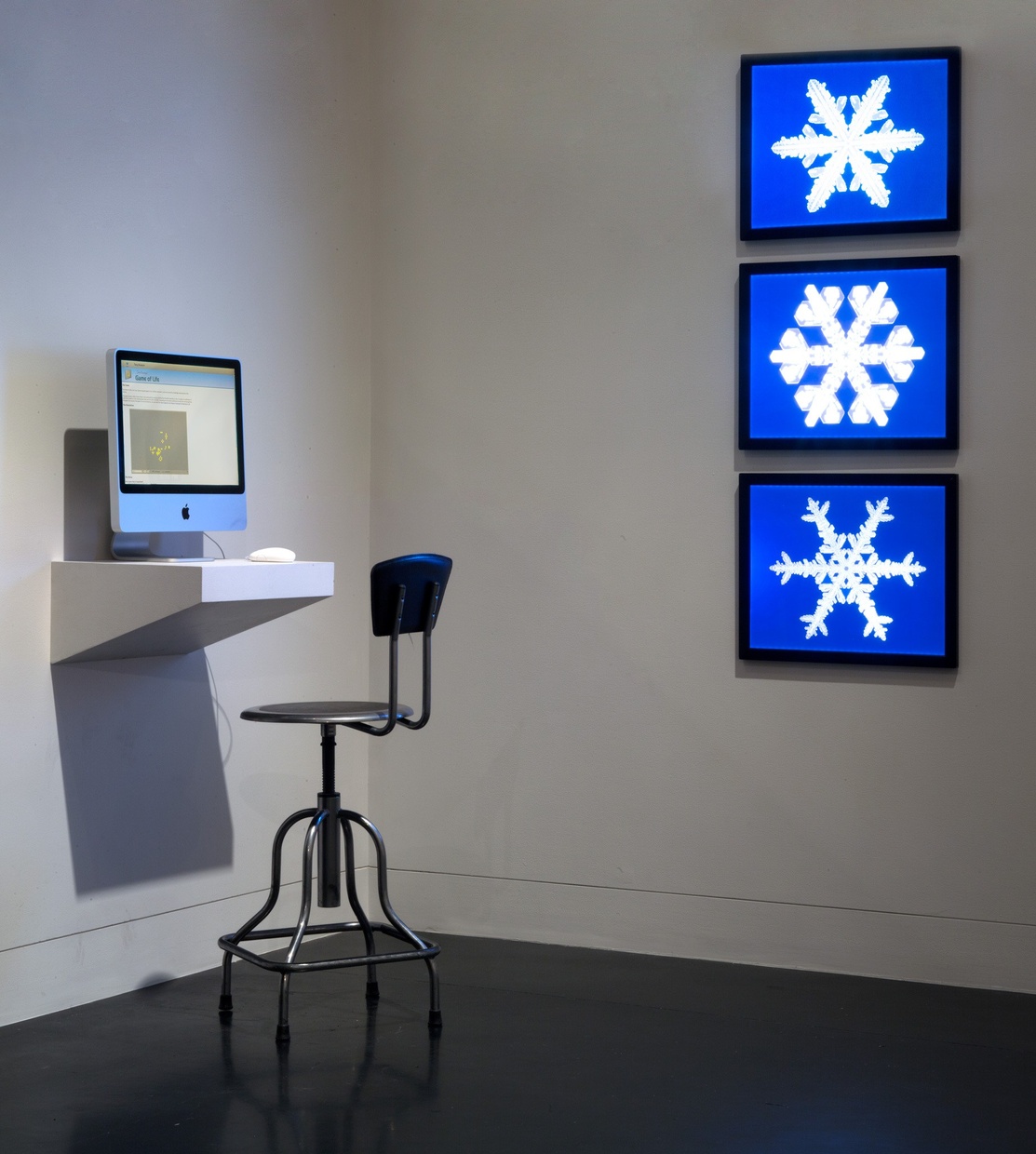 Of course, no discussion of mathematics and pattern is complete without a consideration of time. Time is the variable by which mathematical patterns develop and evolve; systems of equations that describe the evolution of a state variable—such as distance—over time are called dynamical systems. Such evolution can be monitored either continuously, resulting in a set of differential equations, or discretely, resulting in a set of difference equations. These systems are deterministic if the future state, xn, is entirely dependent upon the present state, xn–1, and does not depend on chance or probability. To put it more generally, where we go is dictated by where we are and where we have been. Simulations given a specific starting point, or seed value, will always produce the same outcome. A stochastic system, on the other hand, has an outcome governed by chance, so simulations given the same initial condition can lead to very different results.

Both collections of snowflake images demonstrate this element of dynamics. Bentley’s photographs capture a brief moment in time, documenting the snowflake’s complete structure with no evidence of deposition (the direct transformation of a gas into a solid) or sublimation (the converse transformation of a solid to a gas). In the construction of their Snowfakes, Gravner and Griffeath use an iterative model to create their images; that is, they repeat the mathematical procedures over and over again, each time using the result of the previous iteration. While the complete Snowfake forms in Sixfold Symmetry resemble Bentley’s photomicrographs, dynamic images of the snowflakes’ creation appear online at http://psoup.math.wisc.edu/Snowfakes.htm. The images created by Bentley and by Gravner and Griffeath pay homage to both the science and the art of the process of snowflake formation and, in doing so, chronicle and explore the dynamics of these transient crystals.

Excerpt from essay originally published in Sixfold Symmetry: Pattern in Art and Science, ed. Rachel Seligman and Rachel Roe-Dale (Saratoga Springs, New York: Tang Teaching Museum, 2018)
About Rachel Roe-Dale
Rachel Roe-Dale is an associate professor of mathematics. She holds a master’s degree in applied mathematics from RPI and a bachelor’s degree in chemistry with minors in mathematics and physics from Maryville College, Maryville, Tennessee. Roe-Dale was co-curator of the exhibition Sixfold Symmetry: Pattern in Art and Science and co-editor of the eponymous catalog.