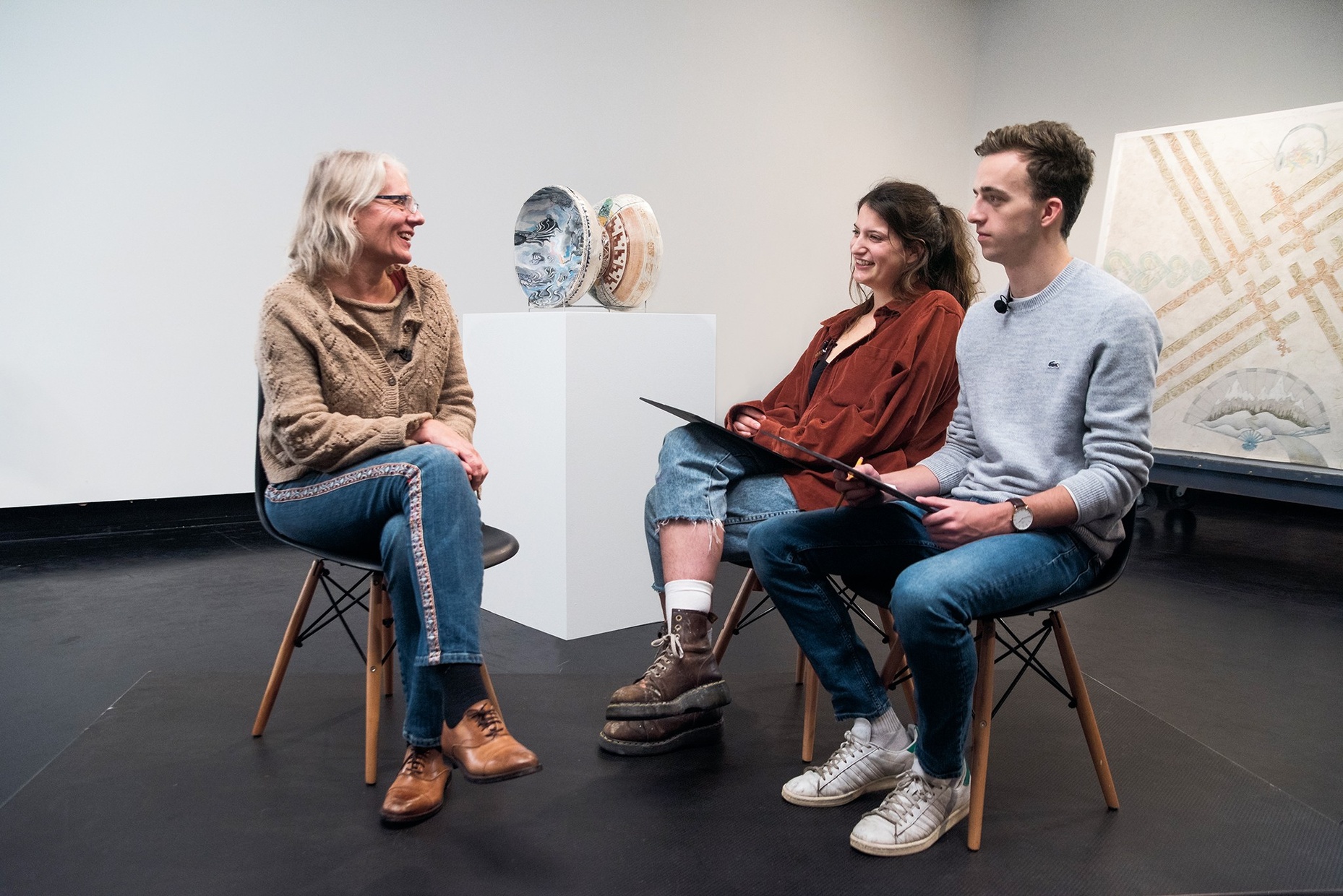 Katie Salk ’19
Where do you source your imagery from? You seem to have such a wide array of interests.

Jane Irish
In 1999, I moved into a live/work space in Northern Liberties, Philadelphia, where I still live. My artistic roots are with the East Village in New York in the 1980s and with doing installation work in the 1990s in alternative spaces and college galleries. Just as I was moving into my new Northern Liberties studio space, I was questioning if I would repeat the imagery I worked with before. The installation work dealt with context, decorating a room using architectural imagery as the vignette. And I was questioning that. I decided a good practice for me would be, for a year or so, to quickly paint images of people I admired as a way to get myself rejuvenated. They were resistors of the Vietnam War, the Black Panthers, people involved in the Free Speech Movement, Mario Savio, people involved in the Paris riots, and other individuals of that time period.

In the early 2000s, I was invited to do a show at the Pennsylvania Academy of the Fine Arts [History Lesson, 2002–2003]. I had done a piece that was this gigantic stage flat that looks like the side of a room. It was all trompe l’oeil with images of a group of veterans that came back from the war and decided to stop it. They paid their dues. They’re a diverse group called the Vietnam Veterans Against the War. I picked that up as a core imagery. But it has become more of history painting, or history ceramics, where I’m trying to absorb what built us up to war and how we see the mythology after. It’s about French colonialism or colonialism in general or the Age of Exploration. What are the things that result in destruction of one country by another country?

James Rothwell ’19
In Antipodes Vietnam Peru 1, you include elements of Vietnam and Peru. Did you travel to each of these places? Does your content come from on-site painting or is it more imaginative?

JI
When I started doing research, I tapped into this poetry collection, part of The Imaginative Representations of the Vietnam War, which is a special collection in La Salle University’s Connelly Library in Philadelphia. I researched through artists’ eyes rather than looking at microfilm copies of journalism from that time. This exploration of anti-war poetry led me to travel. I went to Vietnam for one month in 2008, painted every day, and came back with nineteen paintings. It was a great way to research. You’re standing in a place and you see how the place is being used; children come up to you and want to paint on your painting. I had a farmer come up and show me how to properly paint a lotus. I had a monk stand next to me while I was painting the interior of a temple, and he was smoking a cigarette the whole time. They were wonderful, visceral experiences that informed my paintings.

This ceramic piece was developed from the idea of a cosmogram, a model of the universe where you take a globe and cut it in half and flip it. Vietnam is core to my imagery, and the exact opposite on the Earth is Peru. Drilling a line through the Earth from Huế, Vietnam, leads to the mountains of Peru. Some of the other imagery has to do with Humboldt, who was an explorer in the late 1700s and early 1800s in Peru and did analyses of the ecosystems.

This piece is part of a series that I have been working on for the last two and a half years about cosmological ideas, originally based on an essay by Edgar Allan Poe, called “Eureka.” (Poe dedicated the essay to Humboldt.) It is almost as though the universe is the main character of the plot, and the plot of God is perfect, or the plot of the universe is perfect. And I use that as a basis for a creation myth that I wanted to do a cycle of works about. This is almost like the principal particle of the Big Bang. It’s a condensed form of the universe that later becomes a series of paintings.

The imagery in the inside of the Vietnam side of Antipodes is a motif I experienced in Huế in a temple called Khải Định. And it’s what the Vietnamese pictured as their cosmos. This was the basis of a giant painting I did, so there’s a flow between the 3-D and the 2-D. In a way, the 3-D gives me some freedom. I wouldn’t have made a painting of Peru probably. But the ceramics open up my practice. Experimenting in a new form opens your mind.

JR
You often present imagery of foreign places to Americans. Do you think there would be a different relationship between your art and the viewer if you were to show in Vietnam?

JI
I grew up during the Vietnam War. I graduated from high school in 1973, and the war ended in 1975. My two older sisters participated in the anti-war movement. And it’s ingrained in me that my ideas of maturity or freedom are based in things that I experienced as a young person. I always felt that I was responsible in a way for reparation and that, as an artist, embracing the beauty of Vietnamese culture was something that I should do. I know Vietnamese artists, and when they see my work, they’re very happy about it.

JR
Text often plays a role in your works, including with Antipodes. How does text fit into your process?

JI
One of my favorite paintings ever is This Is Not a Pipe [or The Treachery of Images, 1929] by René Magritte. You wonder, what does that mean? This is not a pipe. It’s a pipe. It was this imbalance that got me to like that painting so much. For my first text works, I took Vietnam resistance poetry and cut out foam letters, glued them down to a giant Tyvek support, gessoed it, and then painted a big, rococo room on top. You have this image of beauty and then the oligarchy—like when you think of the decor of the Frick Collection or something—on top of the text.

In Antipodes, I have some of the script from Poe’s “Eureka” around the edge of the bowl. And it’s humorous in a way because it talks about how there cannot be antipodes, that we should not be as nihilistic as an antipode or something like that. It’s setting up his whole cosmological essay. He’s talking about criticizing the transcendentalist and talking about the history of philosophy in a weird, retro way by reading a letter that he found in a bottle from the future. It’s obtuse. And that’s where the idea of antipodes first came to me, just reading the word and doing a little drawing while I was reading the essay. I made a very simple drawing of a red bowl and a blue bowl with a hole through the center. And that became this object.

Text is a challenge. It was very popular when I started as an artist. My peers, young artists that were around me, were experimenting with it. In the 1970s, I saw Cy Twombly’s 50 Days at Iliam, which is a cycle about the Trojan War. It’s a wonderful use of the drawn word, but in some ways, I felt like I wanted to change the aggression in that painting. I think I’m doing that now, twenty-five years later.

Ian Berry
Do artists have a responsibility to be activists?

JI
It’s such an important tool, and I think it’s best if we use it. There are different ways to do that. If your work is about the sublime and poetic expression, that sort of negates the strife. Your work can have this political content but not appear so. But I think it’s core. An artist that I knew very well, Bill Walton, who was a minimalist sculptor, said, “The only work that lasts is political work.”

That’s a good reason for your work to last, if it has a meaning to the culture in which you’re in. And it can be poetic and open or history painting or have an agenda. I have to admit, I do have an agenda. It’s to try to change the direction of militarism toward a peaceful outcome. How do we do that? If it’s possible, can artists help? Yes is the answer. 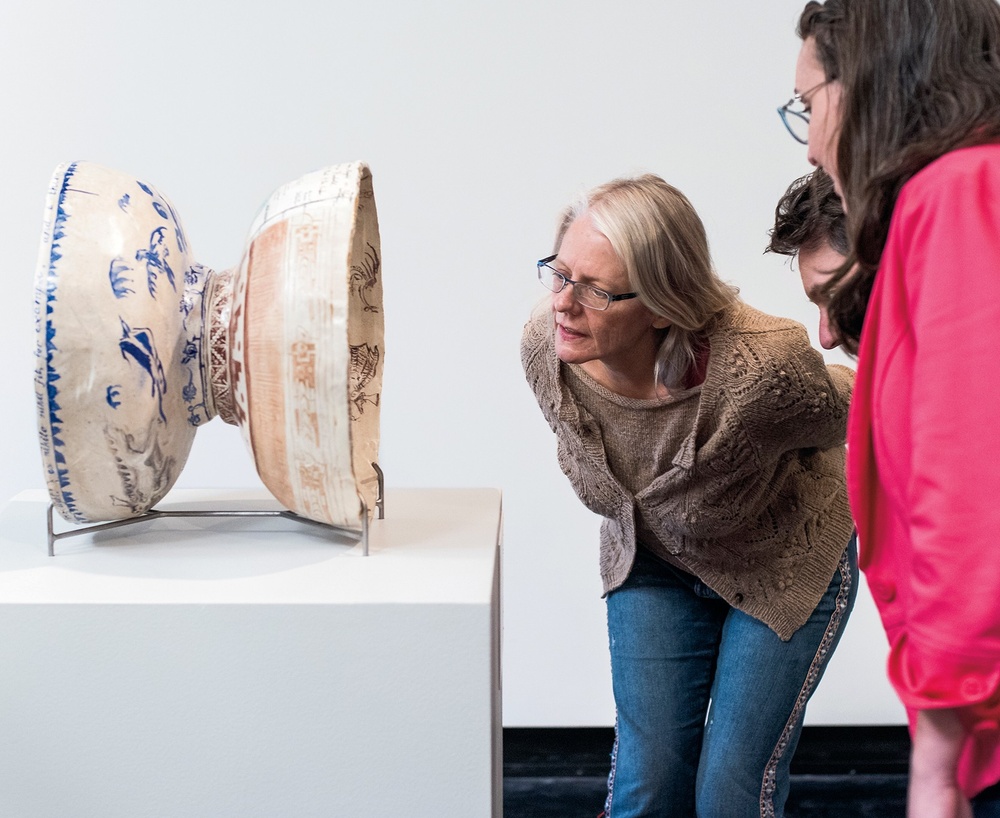 About Jane Irish
Jane Irish earned her BFA from the Maryland Institute College of Art and her MFA from Queens College, City University of New York. Her work, exhibited and collected by various US institutions, incorporates imagery from her travels through France and Vietnam and examines the effects and legacy of the Vietnam War. She lives and works in Philadelphia.