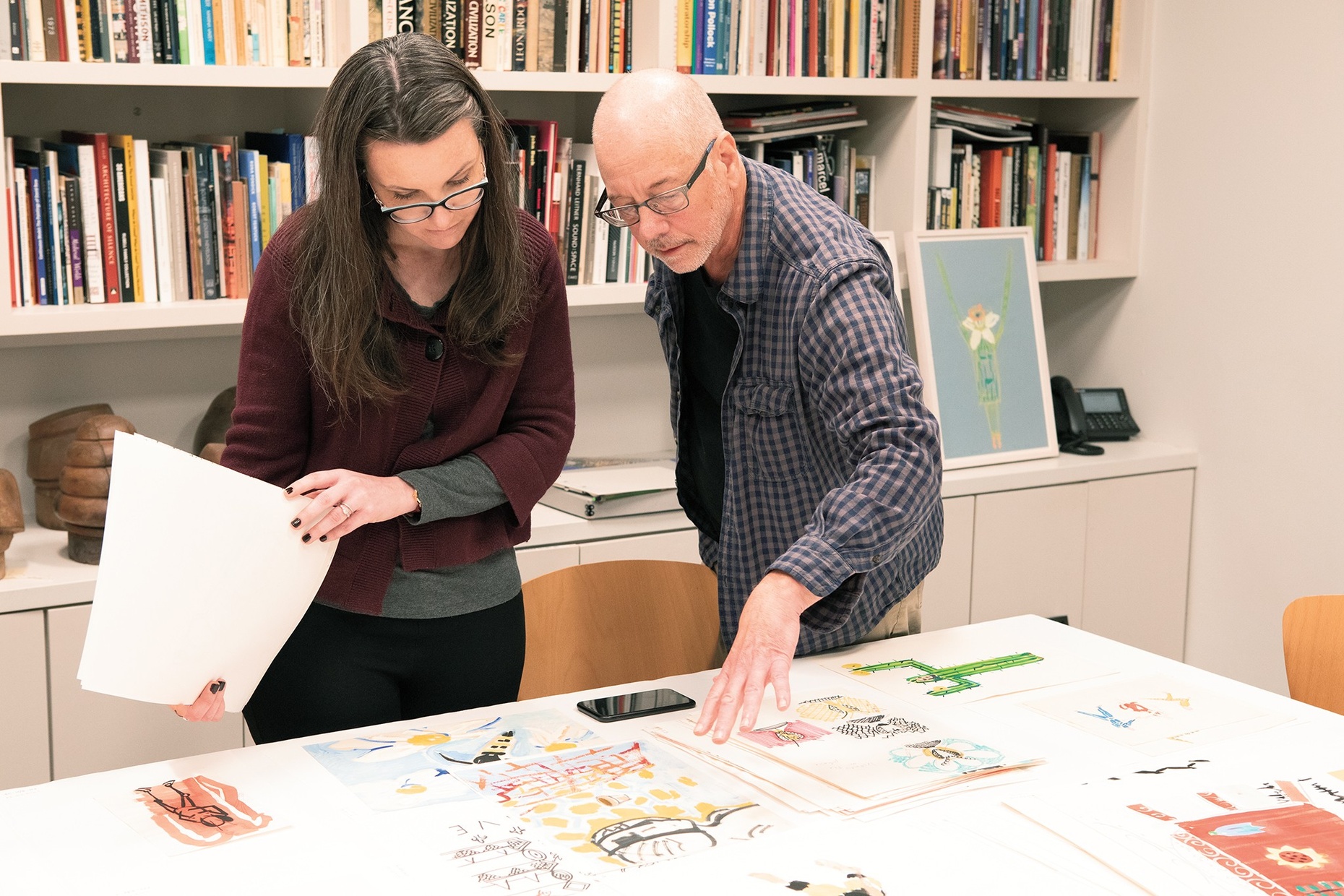 In 2016, the Tang Teaching Museum acquired the digital video of award-winning film Beehive (1985) by Frank Moore and Jim Self and an archive of drawings by Moore featuring costume and set designs for Beehive and other dance and theater productions from the 1980s. On April 23, 2019, Dayton Director Ian Berry and Mellon Collections Curator Rebecca McNamara interviewed Self about the film and stage productions of Beehive.

Rebecca McNamara
How did you meet Frank Moore?

Jim Self
Frank and I met in 1979 through our mutual friend Richard Elovich. In the fall of 1978, I was on tour with Merce Cunningham in France and Richard came over from Italy to see the performances. He wanted me to meet his friend Frank, who was in Paris for some sort of residency. But it wasn’t until we were back in New York in the spring of 1979 that Frank and I actually met. About a year later, after I left Merce’s company, I was planning to do a show at the Cunningham studio with some new pieces I was working on.

Ian Berry
Of your own choreography?

JS
Of my own work, yes. Richard and I were collaborating on a piece involving storytelling and movement. It was called Silent Partner Changing Hands. Richard thought it would be a good idea to get a visual person to help with the look and suggested Frank.

It was the first time I was presenting a full show of my work in New York. There was a trio called Marking Time and a solo dance called Uproots, which I had done for a commission at the Walker Art Center a few years earlier. We went over to Frank’s loft on Crosby Street and talked. Richard asked Frank to do “a costume or something, like a T-shirt.” Frank said, “I could do all the costumes.” I asked, “Have you done dance costumes before?” He said, “No.” I thought for a minute and then said, “All right. Let’s try it.” It was quite a gift.

Marking Time had three energies. One was very fast and frenetic, and one was slow and sensuous and adagio, and that was for Ellen van Schuylenburch. The other energy was steady and measured as if “marking time.” The drawings Frank made interpreted that energy as death, and he painted a skeleton onto the dancer’s unitard. We hired a seamstress to build the costumes. She thought Frank was a total lunatic because his ideas were so unusual and very specific regarding the looks and actual construction. It all worked out very well, and those costumes are pretty indestructible. I still have them.

In the fall of 1980 I was working on a new duet, A Domestic Interlude. Frank watched a rehearsal and said, “It looks like a spider’s web and the two dancers are being drawn into the web.” I listened and was thinking, “You want that narrative on this? It’s just a duet, come on.” This was long before we started Beehive. We haggled back and forth and worked out a solution. That dance premiered at Dance Theater Workshop along with a revival of Scraping Bottoms with new costuming by Frank. We got a lot of good press, which led to Jacob’s Pillow offering a commission for a new work. We created Blue Grotto, also very well received by the public and press. For a couple of years, Frank and I didn’t work together. Instead, I worked with two different artists, Ken Tisa and Edward Henderson. After that, Frank and I came together and started Beehive.

RM
You made both a film and a ballet called Beehive. What was the original conception of the project?

JS
It started with the film idea. I had been awarded a National Endowment for the Arts film grant, and I asked Frank to collaborate. He proposed basing it on the idea of an insect. That didn’t go over so big with me, so we kept talking. Frank worked with bees when he was younger and described how they danced to communicate and built amazing hives that contained storage areas, birthing cells, and dancing spaces.

He wanted to put dancers on pointe so they would look more bee-like. At that time, I was beginning to work with ballet companies, so I said, “Great. We’ll do a whole thing.” The bee movie was a television show for the bees, so it was not meant to be a big deal. But as we went on, we realized it was very special in itself. We’d use the outtakes and the rushes to raise money. People loved it; they just went crazy over it.

The whole project got bigger and bigger and bigger because I kept working with bigger casts. I conceived a giant ballet. I got a gig in Angers, France, at the Centre National de Danse Contemporaine, in 1984. I was there for a year teaching and choreographing for the students. I would send money back to the United States, and it was the worst time in the world to be doing that because the exchange rate was very low. That’s how Frank had time to do many of these drawings, because he was getting paid out of that money. He continued the drawings when he came over and spent parts of the spring semester there in 1985. We started working on the ballet, but it was more like a long narrative dance/theater production. One or two of the dancers could actually perform on pointe, but the rest of them were modern dancers. They were young adult students from all over Europe. Not very experienced, but wonderful to work with.

The composer Scott Johnson did the score for the dancing part and performed as an electric guitar-playing drone. Rob Besserer and Teri Weksler from New York were featured dancers. Rob was the cactus and Teri was my dance assistant and played a flower part in that production. A big hexagonal movie screen was hanging in the upper left corner of the stage. There is a moment where several of the bees are watching “Bee TV” on stage when a giant spider comes into the hive and attacks the bees. There is a fight and the spider gets obliterated. The bees continue on and celebrate the revival of the hive with a big parade for all the flowers. The queen comes out at the end of the procession. It was a lot of fun, and we worked out so many ideas there.

I got an invitation to go to the Sundance Institute in Utah that summer of 1985 to work with Ballet West. Coincidentally, Utah is known as the “Beehive State.” There were around thirty-five dancers, and all the women danced on pointe. It was the first time working with professional dancers on that project. We had a public showing of the work in progress, and everybody loved it.

The director of Ballet West was moving to Boston and commissioned a version of Beehive for Boston Ballet, which was to be done in the spring of 1987. Thousands of people saw it, and many people came from New York and around the country, including my mother, sisters, nieces, and nephews from down South. There were some problems working with such a big company in a very expensive theater setting. Almost no time to work in the actual theater prior to opening. And traditional ballet fans and some critics were not as receptive as the general public.

RM
How were you feeling with the mixed critical reception in Boston?

JS
Beehive didn’t come from the ballet tradition. Most of the audience loved it, and years after, I would run into people who said how much they liked it. I realized I don’t really understand how the ballet world works, the aesthetics and priorities. They weren’t comfortable with my working process and different approach. They couldn’t take funkiness.

IB
There are rules.

JS
There are rules, and funky doesn’t belong. At least, not at that time.

IB
How did you use drawings? Did you and Frank talk to each other through drawing? Or were they to describe the project to other people?

IB
Was it also a way to ask set builders and costumers, “Can you make this?”

JS
Yes. The people who were actually building the sets and costumes over time became more and more professional. So the instructions and drawings became more specific and technical.

RM
What is the story behind Beehive?

JS
In the 1980s there was a heightened fear of nuclear disaster. The premise for the film is about what would happen if, after the nuclear holocaust, somehow the bee species and human species merged and created creatures that were “bee-people.” The only way they could reconstruct the lost culture was to go back into storage vaults and look at old videos of The Honeymooners and Bewitched. So the film was meant to be Bee TV—entertainment for this new species.

IB
There’s a lot of TV and pop influence in the film.

IB
Sci-fi, all that, seems as much of an influence as ballet or any dance traditions.

JS
Absolutely. Many people doing hip-hop and working on the movie Wild Style were downtown artists. The film people and the technical people who lived downtown were filming the uptown scene, and that was what was happening. Keith Haring was making B-boy drawings. That was in the space as well. We were definitely playing with that. It was fun, and it was totally natural to mix it up. That generation of artists in the 1980s were breaking away from the minimalist, modernist rules. It was the end of that period. Whatever worked, color and play, TV and dance and music references.

IB
Was there ever a conversation to produce or market it for TV?

JS
Yes. There was a series at that time out of Minneapolis called Alive from Off Center. I sent the curator the film and she said it was too funky for TV. I thought, that’s the worst choice one could possibly make regarding presenting new, edgy work. You couldn’t get any edgier than Beehive at that time. But I think they didn’t like it because it was too cartoonish for them. Alive from Off Center had a certain aesthetic.

IB
Conceptual and abstract. What were other influences on the choreography?

JS
When I was still with Merce Cunningham’s company in the late 1970s, he offered a video workshop for people who were interested. I learned about dance in TV space. Bodies go back and get smaller, and as they come forward they’re huge. So, bodies moving toward you have more power than bodies moving away. I learned that there are four directions you could enter. You didn’t have to enter always from the side. You could come up from the bottom, come in from the side, come in from the top, and this definitely influenced Beehive. Martha Graham’s dance Lamentations influenced the Drone’s crying scene, and generally the whole set look was influenced by The Cabinet of Dr. Caligari, a German silent film from the 1920s.

Originally published in Accelerate: Access & Inclusion at The Tang Teaching Museum 3 (2019)
About Jim Self
Jim Self works in dance, performance, visual media, and installation. An Alabama native, Self began his dancing career in 1972 in Chicago. In the 1970s and 1980s, Self performed with Merce Cunningham Dance Company, choreographed for Robert Wilson productions, and collaborated on multiple projects with Frank Moore. From 1989 to 2014, he taught dance and performance at Cornell University. Self lives in upstate New York and generates performance works and other collaborative projects.