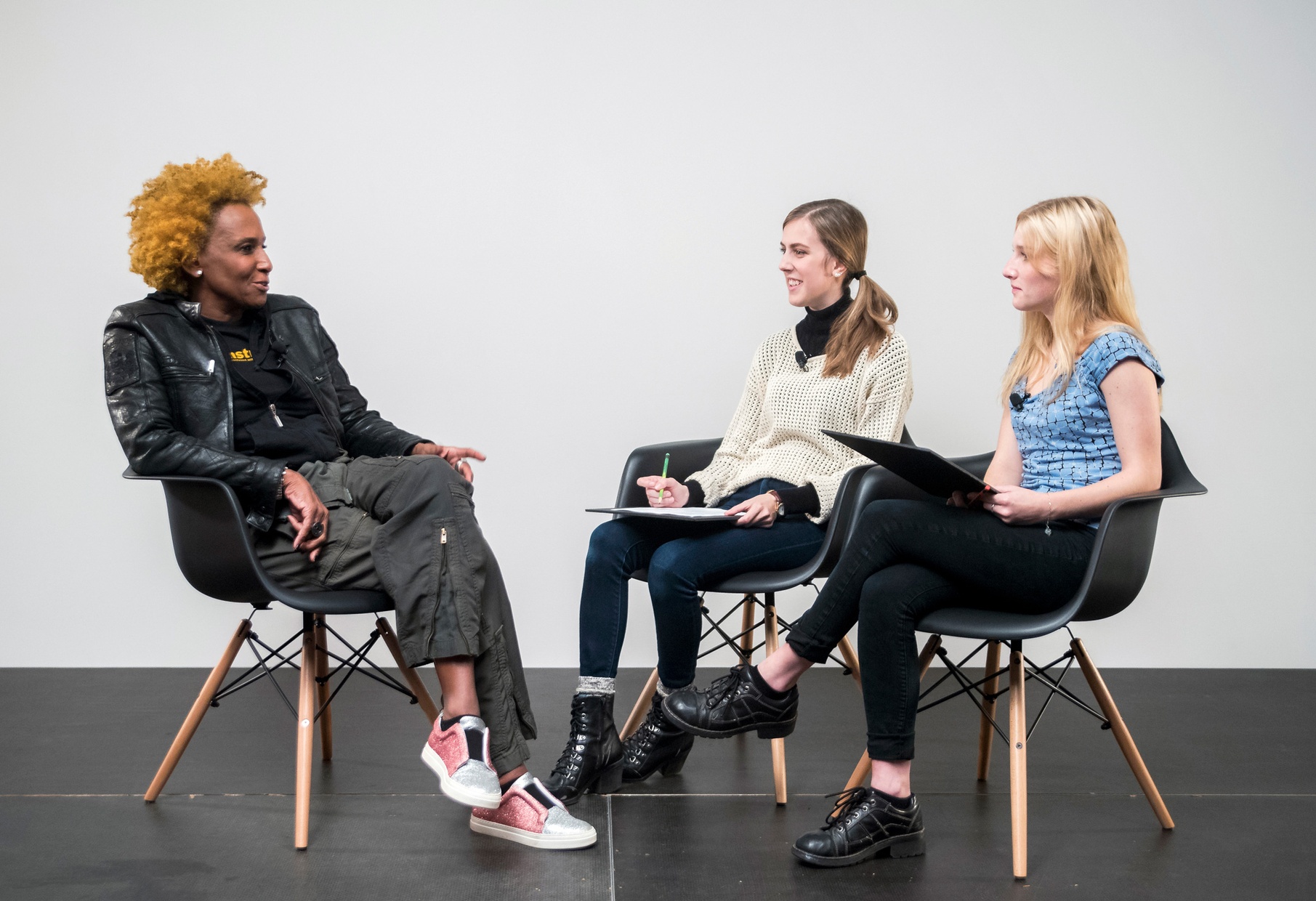 This interview was part of a series of interviews with artists conducted by Skidmore students in the Art History course “The Artist Interview,” led by Dayton Director Ian Berry.

You grew up in Scarsdale, New York, an overwhelmingly white community.

Oh, God, yeah. There were seven black families when we lived there. I went to the prom with the eligible black guy in my class. I had to educate myself on my blackness down the road, because in high school I was listening to New Riders of the Purple Sage—not cool at all. And then, senior year, I had an epiphany and was introduced to rhythm and blues and soul music, Billy Cobham, Herbie Hancock.

You worked in fashion photography before working in fine art photography. What was that transition like?

I did fashion photography for ten years. There was a pretty pivotal moment that happened. I started getting more conscious about my reality and what was happening in the world. I was in Soho at this restaurant named Jerry’s, and I was already starting to question how fashion was going to pan out. When I did an editorial story, my photographs only had a twenty-eight-day lifespan. After twenty-eight days, they were garbage. You’re putting your heart and soul into this. And at the end of the shoot, the fashion editor would say, “Okay, this is the next shoot.” I didn’t even have time to wallow in a pleasurable way of my accomplishment.

Anyway, I’m at Jerry’s. I’m having dinner with a bunch of folks. We’re all just bullshit fashion chatting. You talk about a shoe for, like, ten minutes, saying, “Blah, blah, blah.” Nothing relevant. It was the day that Nelson Mandela got released from prison. And I say to them, “This is amazing. Nelson Mandela finally got released after twenty-seven years in prison.” My God, this is a big deal for me. And they turned to me and said, “Donald and Ivana are getting a divorce,” which was the front-page story in the New York Daily News that day. I was like, “Donald and Ivana? Are you freaking kidding me?” When they said that was the important thing that had struck them on that day over Nelson Mandela, that was the moment where I said, “I gotta get out. I can’t be here.”

As it would happen, the art director from Essence sent over Lyle Ashton Harris, who was a photographer as well. But at that time, he wanted to know about fashion. We ended up having lunch, and he showed me this artist that was doing photography. There was a big catalog and every- thing. I was like, “Really? I could shoot this with my eyes closed.” I wasn’t even looking at it from a conceptual point of view. I was looking at it just as straight photography. That was the moment when I realized, this is my trajectory. This is how I have to do it. At that time, people didn’t care if you had a great mailing list; they wanted credentials. I’d already had my first kid. I started looking at grad schools. And the School of Visual Arts was a good spot.

You felt like you needed to go to grad school?

You had to go to grad school. Otherwise, nobody would take you seriously.

Do you feel like you learned anything in grad school that actually helped you pursue your career in the arts?

Definitely. Grad school gives you that time without pressure to explore your ideas. My first semester I didn’t really know what my direction was going to be. And then, by second semester, I started getting much more into racism and identity. And that’s what really made the work come together and have a focal point.

Even though I grew up in this white neighborhood, I never experienced racism in my face. But during that first semester, I had an incident where I experienced racism in my face. It was shocking. That moment changed me completely. I started to explore the history of African Americans, of Afro-Caribbean people, and in doing research and learning about it, I was getting angry and realizing that the history that we’ve been taught has been biased. I was asking, how can I go in there and make a change in terms of representation? Had I not gone to grad school, I don’t know if I would have come to that.

You made Do or Die, which is in the Tang collection, when you were in grad school. Do you remember the day that you took that photograph, where you were, and what brought you there?

I don’t remember the date. I know that it was warm because I was standing outside naked. That was the beginning of the second year, September, maybe early October. The premise was really simple: we’ve broken the chains of slavery, and now we’re free and we’re doing our thing. It’s a diptych. The image you have here is called Do or Die. And it’s the side where you see her with the chains and her face is covered.

Even though I had become racially super-conscious at that point, I still had the lingering fear, so to speak, of going to the South Bronx, taking my clothes off, standing on this rubble, and shooting this thing. I took maybe five or six of my classmates with me to watch my back. This area was so depraved. You had crackheads burning the plastic off copper wires to sell the copper. We started doing my photograph, and all of a sudden, there was this Jeep that comes by at, I don’t know, sixty miles an hour and there were four or five black guys in there. And the beats are pounding. That Jeep, you feel it. It’s like a huge heartbeat. They see me standing in this field naked. And they stop to a screeching halt and back up at sixty miles an hour and come running across the field. At this juncture, I’ve got maybe thirty people there watching me. And I’m like, “Oh, shit.” It was a really interesting moment for me because I was harboring these stereotypes. I was that white woman in the elevator clutching her pearls. Those guys came over and talked to the people that were watching, who told them what we were doing. And they waited until I was finished with the shot. And they were the most respectful, coolest guys ever. They were like, “Yo, sis, much respect. We appreciate what you’re doing.”

You’ve said previously that your work is reactionary. I’m wondering how this impacts your creative process and what planning the vision for a work looks like.

If we’re talking about Liberty in the South Bronx or Do or Die, I had a very distinct idea of what I wanted to do. With The Discreet Charm of the Bougies, which is my housewives series, there was a pivotal moment that happened for me photographically. I wanted to be able to allow a photograph to happen (à la Henri Cartier-Bresson). For one in particular, I was in Bali. All I had was the dress, the shoes, and my cameras. I knew I wanted to do a shot for the housewives series, but I had no idea what that was going to be until I stumbled upon it. I was with my son, and we’re driving in these mountains. And the fog was so thick. I mean, it was eerie. So I say, “Stop the car. Pull over.” Throw the dress on. Throw the shoes on. That’s much more exciting than knowing and having a sketch of what the shot is going to be beforehand.

So you transitioned from planning shots to being more spontaneous?

Yeah. That’s more fun. Life should be fun. There should be joy. You shouldn’t be stressed out. But mind you, it took me some decades to figure that out. When I was your age, I was a total nutjob. I was very competitive, I wanted to get to the top, be the best. Then you realize, it’s not really that important.

How do you feel about being labeled one of the most controversial contemporary artists?

I can roll with that.

I’m interested in the discourse. I’m not about propaganda or anything like that. I’m not trying to force-feed anybody. But it’s nice to be able to learn something from you, and you learn something from me. I think there should always be this exchange where we as human beings can evolve and explore things and go to different areas that maybe we wouldn’t otherwise go to if we had not seen a particular image or had not engaged in a specific conversation.

Otherwise, what am I doing? I’m just making pretty pictures? I know how to make a pretty picture. But does it say anything? I want the photograph to say something, to start some kind of discourse. If you see one of my photographs, generally speaking (unless the people are totally vacant), when you walk into the room, you’re going to say something about it. And you’re probably going to ask the owner, “What’s this about?” So, there will be a discussion. I know that. That always happens. And for me, it’s super important that it happens and continues to happen.

Originally published in Accelerate: Access & Inclusion at The Tang Teaching Museum 3 (2019)
About Renee Cox
Photographer and mixed-media artist Renee Cox creates self-portraits of her nude and clothed body to at once celebrate black womanhood and critique societal attitudes about race, desire, religion, feminism, and visual and cultural aesthetics. Born in Jamaica, Cox grew up in Scarsdale, New York, and started her career as a fashion photographer for high-profile magazines before turning to more conceptual photography. Her work has been featured at numerous art institutions throughout the country, in the 2006 Jamaica Biennial, and elsewhere.