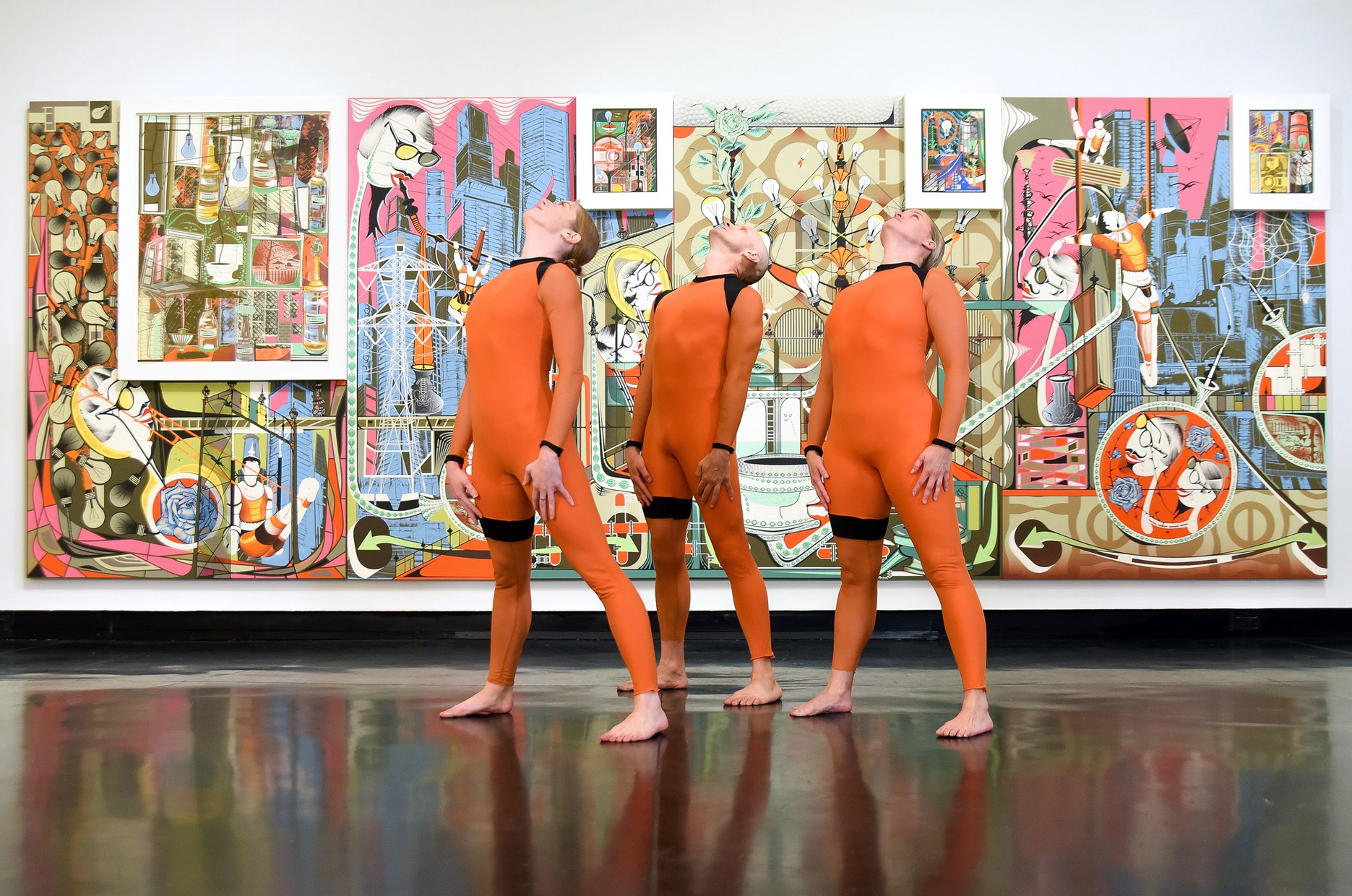 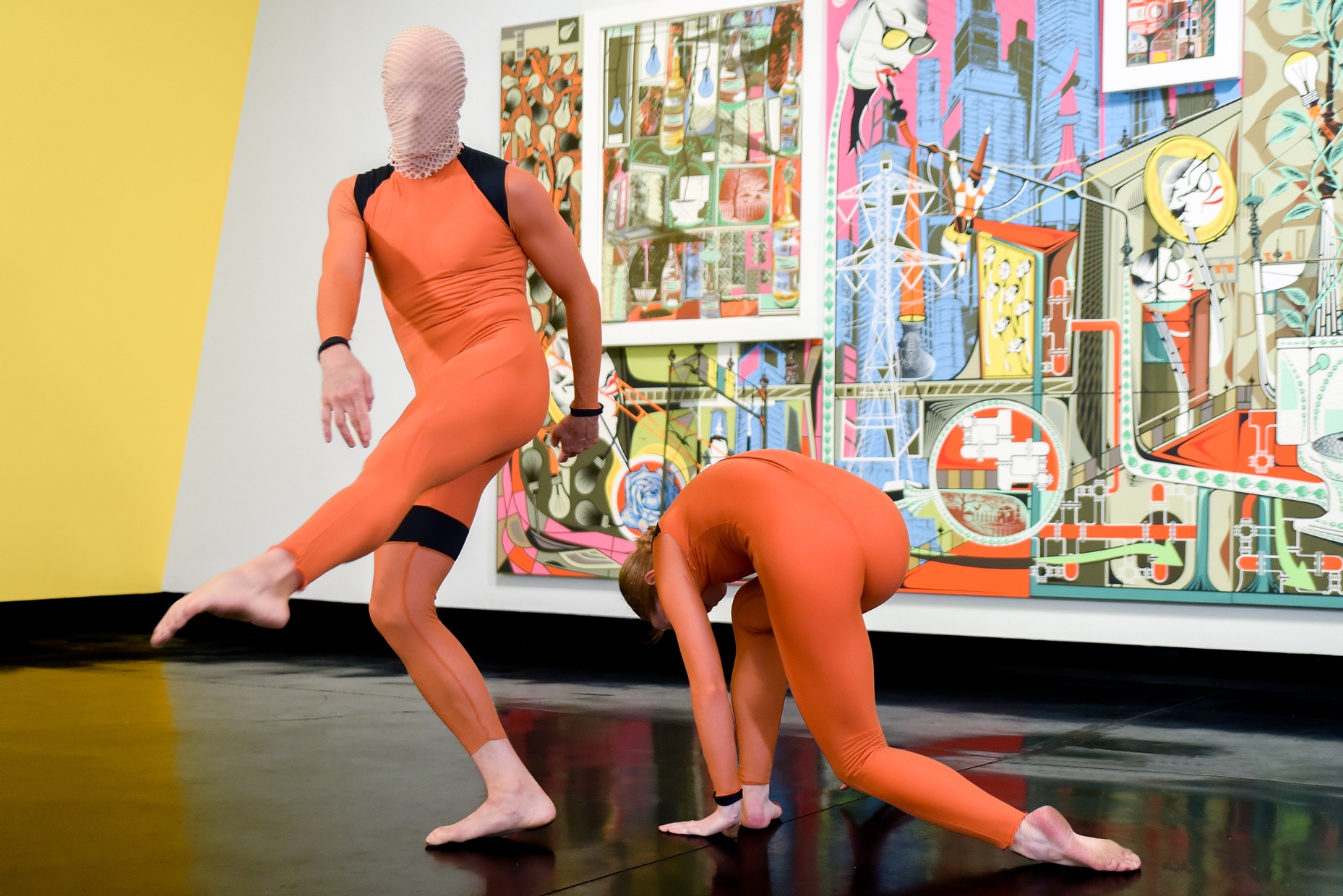 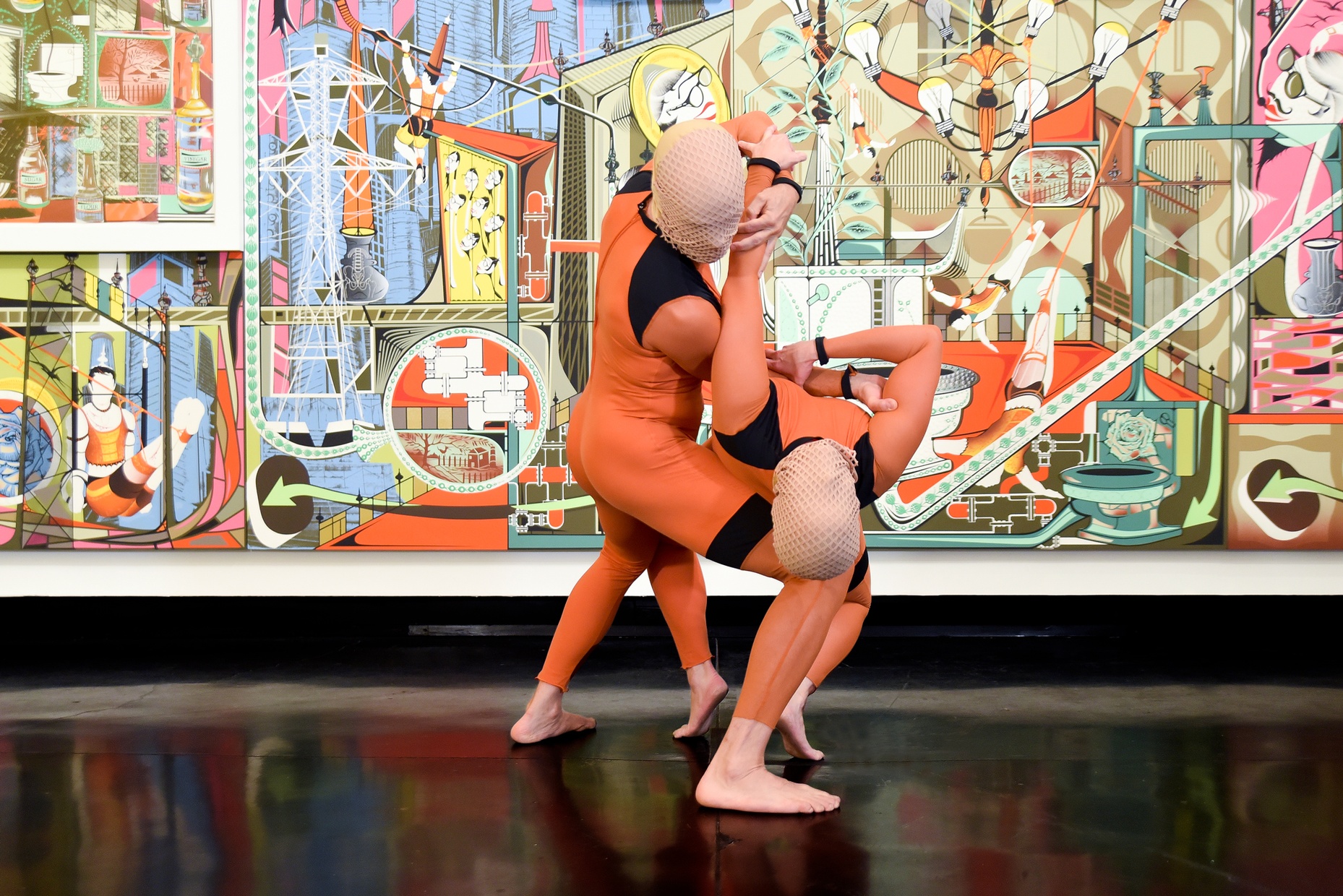 Assistant Professor of Dance Jason Ohlberg’s Metamorphosis, choreographed in response to Lari Pittman’s Once a Noun, Now a Verb #1 (1997), debuted on September 20, 2018, in the exhibition Give a damn., where Pittman’s four-panel painting was on display. The dance was performed by Ohlberg and Lecturers in Dance Erika Pujič and Christin Williams and featured a newly commissioned score from Music Director Carl Landa and costumes by Eric Rudy.

As a choreographer, I am honored to have the opportunity to respond to the work of an artist such as Lari Pittman, whose paintings compel me to become lost in their intricate worlds of colorful subtext and imagery.

Any response I create to the work of another artist is just that: my response, my interpretation. This is especially important to note with a painting as bold and complex as Once a Noun, Now a Verb #1. While on one hand a vibrant reflection on modernity and urban life, I believe this work also asks us to contemplate mutability and identity. In blurring interior and exterior spaces, Pittman places a towering metropolitan landscape—perhaps symbolic of human ambition and achievement—as a backdrop to the maze of the city’s literal and metaphorical inner workings. I’m intrigued by the fact that an object signifying our most base human function is given the central altar space and is surrounded by identity-less acrobatic figures, floating or falling in crucifixion-like postures while tethered to symbols of their ideals. The only discernible simulation of identity I can see seems to be superficially imposed upon egg-shaped heads with tails that are clearly built for swimming—or perhaps for creating. Yet, follow the city’s plumbing, and it’s no longer clear if what these figures are consuming helps construct identity or strip it away. In my mind, the painting poignantly speaks to the super-human feats required to navigate survival in the modern world, and celebrates the wounds acquired along the way.

When creating my own work, I am primarily concerned with physical narratives and ways of reading movement that can transcend story or plot. I’m interested in how movement can trigger embodied understanding and kinesthetic knowledge. In responding to Pittman’s Once a Noun, Now a Verb #1, I find myself confronted with the concept of metamorphosis. As we shape and create our urban landscape, does it in turn shape and create us? While navigating the complexities of modernity, does our seemingly inexhaustible ability to adapt enable us to survive at the cost of identity? Are these identities—gender, race, religion, sexuality, nationality—in danger of extinction, or are they the thing tethering us to ideals that are destined to be discarded? What, if anything, does this painting suggest about how we are to relate to one other? Are we creating and being born to a superior version of ourselves, able to withstand our self-made constructs, or are we heading back toward a womb of isolation? 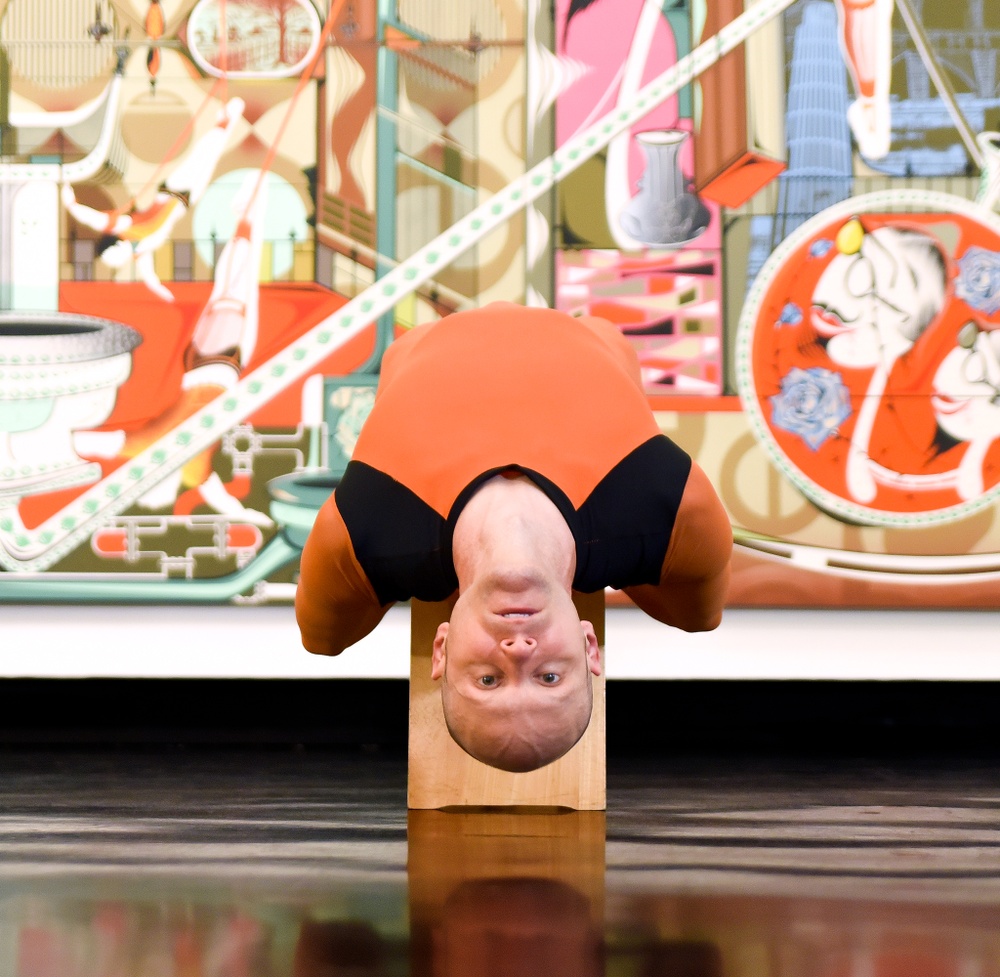 About Jason Ohlberg
Assistant Professor of Dance Jason Ohlberg has danced professionally with numerous companies, including Hubbard Street Dance Chicago, Dance Kaleidoscope, and Chamber Dance Company. He attended State University of New York at Purchase and completed his BFA at Cornish College of the Arts. He earned his MFA from the University of Washington in 2015. He has served on the faculties of Barat College, Hubbard Street Dance Chicago, Spectrum Dance Theater, the Pacific Northwest Ballet, University of Washington, and Cornish College of the Arts.

Give a damn.
Exhibition