Accelerator Series:Get Up, Stand Up: Rights and Responsibilities of Citizenship

On Monday, September 24, at 6:30 PM, join Tang Curator-at-Large Isolde Brielmaier as she moderates a discussion about the varied ways in which we conceive of citizenship and the rights and responsibilities we believe citizenship may or may not encompass. Panelists include artist Sam Durant, whose work will be on view in the Tang exhibition Give a damn.; artist and For Freedoms cofounder Eric Gottesman; and Skidmore Assistant Professor of Marketing, Management, and Business Minita Sanghvi.

This event is free and open to the public.

Sam Durant is a multimedia artist who lives and works in Los Angeles. He was born in Seattle, Washington in 1961, received his B.F.A at the Massachusetts College of Art in Boston and his M.F.A at the California Institute of the Arts in Valencia. Durant has been the subject of one-person exhibitions at the Mildred Lane Kemper Art Museum, St. Louis (2015); Los Angeles County Museum of Art, Los Angeles (2014); Museo d’arte contemporanea, Rome (2013); the Massachusetts College of Art, Boston (2006); the Kunstverein Düsseldorf (2003); the Walker Art Center, Minneapolis (2003); the Wadsworth Atheneum Museum of Art, Hartford, CT (2002); and the Museum of Contemporary Art, Los Angeles (2002). Important group exhibitions include “The Natural Order of Things,” at Museo Jumex, Mexico City (2016); “America is Hard to See” at the Whitney Museum of American Art, New York (2015); “See You In The Hague,” at Stroom den Haag, The Hague (2013); and “Out of Place: Contemporary Art and the Architectural Uncanny” at the Museum of Contemporary Art, Chicago (2002). He has participated in the 2017 Yokohama Triennial, Japan; dOCUMENTA (13), Kassel; the 2004 Whitney Museum Biennial, New York; and the 2002 Venice Biennale, Italy. Durant has been awarded numerous public commissions such as the Waterloo Billboard Commission, Hayward Gallery (2017); “The Meeting House,” at Old Manse in Concord, MA (2016); and “Labyrinth,” Mural Arts Program, Philadelphia (2015).

Eric Gottesman is an artist who makes images and social interventions that address themes of nationalism, migration, conflict, structural violence, colonialism and intimate relations. Frequently engaging communities in critical self-expression, Gottesman’s projects have been shown at health conferences, in government buildings, on indigenous reserves, and in public space as well as at museums like MoMA/PS1, MFA Boston, the Cornell Museum of Fine Arts, Houston Center of Photography, MoCA Cleveland, and the Addison Gallery of American Art. Sudden Flowers, his decade-long collaborative project in Addis Ababa, Ethiopia, resulted in temporary street installations and a collective monograph. Gottesman is a Creative Capital Artist, a Fulbright Fellow, an Artadia awardee, and a co-founder of For Freedoms, an initiative for art and civic engagement that won the 2017 Infinity Award. His translation of Ethiopian writer Baalu Girma’s banned novel Oromaye was published in Hayden’s Ferry Review. He is an Assistant Professor of Art at SUNY-Purchase College.

Minita Sanghvi is an assistant professor in the Management and Business Department at Skidmore College where she teaches courses such as Foundations of Marketing, Advertising and Promotion, and Political Marketing. She has an undergraduate degree in Accounting, an MBA in Marketing from NMIMS, one of the top 10 business schools in India, along with a Masters in Retailing and Consumer Studies from University of Arizona. After working at Leo Burnett in advertising and Wal-Mart in retail management, Minita got her PhD from University of North Carolina Greensboro from the Bryan School of Business and Economics along with graduate certificate in Women’s Studies from Duke. Her dissertation, Marketing the Female Politician: An exploration of gender, appearance, and power won the Best Dissertation Award at UNCG and her book Gender and Political Marketing in the United States and the 2016 Presidential Election: An Analysis of Why She Lost was published in May, 2018.

In addition to research and teaching, Minita is an activist for civil rights and has served on the Human Relations Commission for the city of Greensboro as well as the Board of Governors for the Human Rights Campaign. She lives on the west side of Saratoga Springs with her wife, son and three cats.

About For Freedoms 50 State Initiative

This Accelerator Series event is a Town Hall activation as part of the For Freedoms 50 State Initiative. Traditionally used by politicians as forums to connect with their constituencies, answer questions, and promote their campaigns, For Freedoms Town Halls provide safe platforms for conversations that seek to encourage a more active, collaborative, inclusive, and empathetic community. Town Halls bring together experts in various disciplines such as art, design, policy making, and community organizing in cities across the country to discuss issues related to freedom.

For Freedoms is a platform for greater participation in the arts and in civil society. For Freedoms produces exhibitions, installations, public programs, and billboard campaigns to advocate for inclusive civic participation. Inspired by American artist Norman Rockwell’s paintings of Franklin D. Roosevelt’s Four Freedoms (1941)—Freedom of Speech, Freedom of Worship, Freedom from Want, and Freedom from Fear— For Freedoms uses art to encourage and deepen public explorations of freedom in the 21st century. Founded by Hank Willis Thomas and Eric Gottesman, For Freedoms encourages new forms of critical discourse. Its mission is to use art as a vehicle to build greater participation in American Democracy.

About the Accelerator Series

The Accelerator Series is the Tang Teaching Museum’s dynamic conversation series on big ideas and big issues that seeks to find new entry points into discussions that veer from traditional paths. As an open and inclusive public forum for dialogue, exchange and questioning, the Accelerator Series ignites a collective sense of intellectual curiosity and fosters thoughtful engagement with a deeper understanding of compelling issues that have the potential to spark radical transformations.

The series features key cultural influencers from the arts and culture sector as well as academia, entertainment, government, journalism, media, politics and beyond, who present new perspectives and disrupt the status quo by encouraging a “getting comfortable with discomfort” attitude in order to think and work through big ideas to drive change.

The Accelerator Series is supported by Accelerate: Access and Inclusion at the Tang Teaching Museum, a project of The Andrew W. Mellon Foundation. 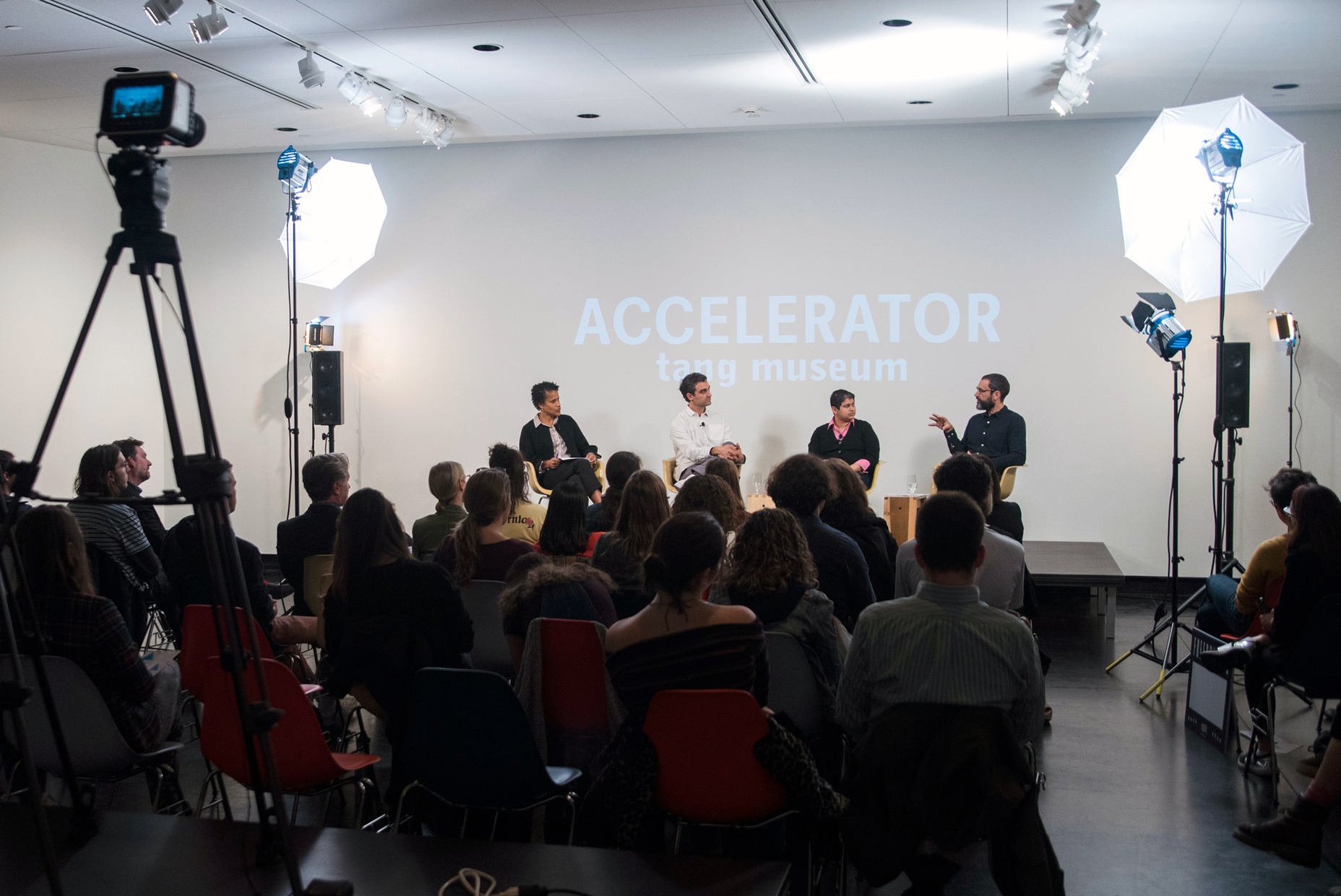 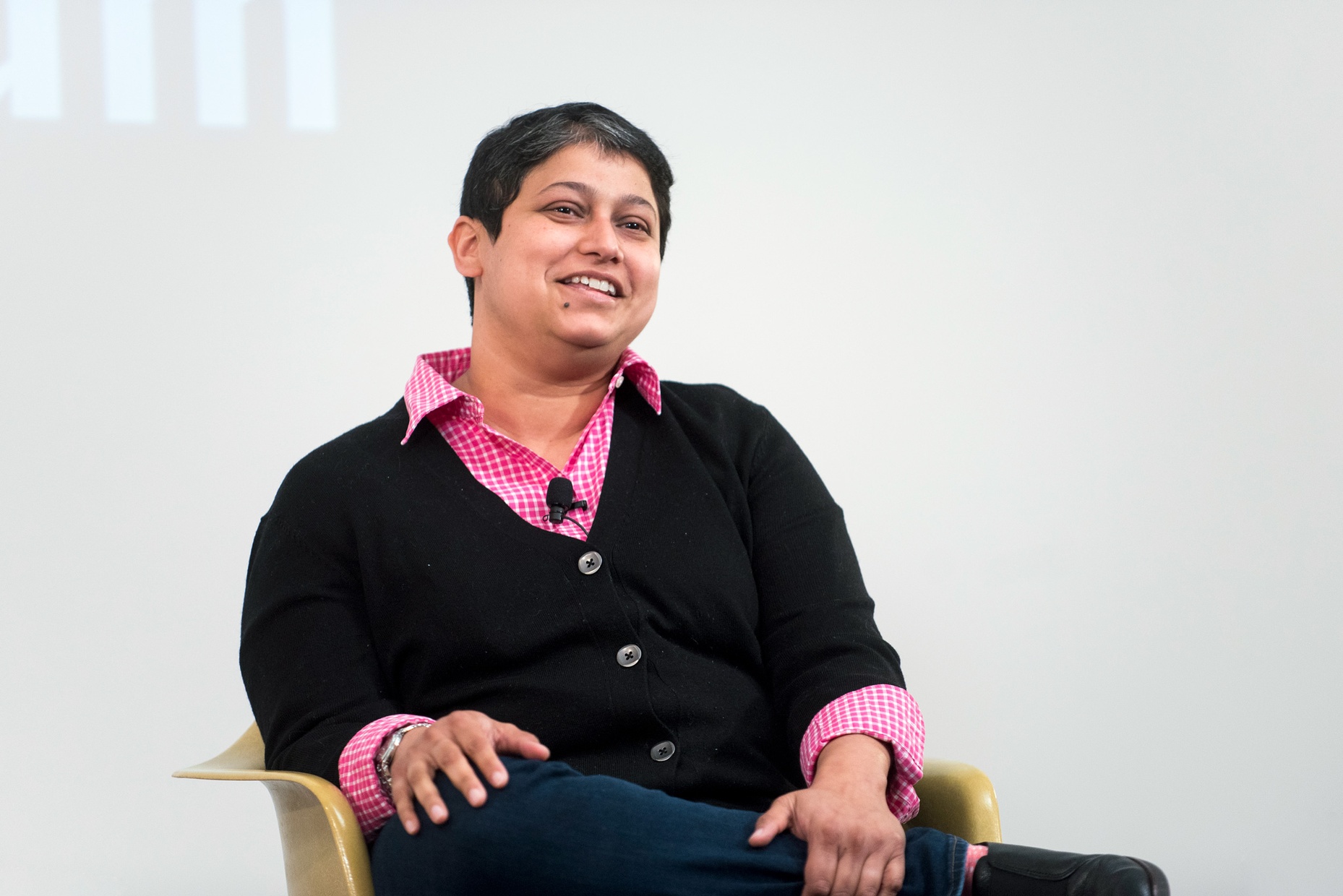 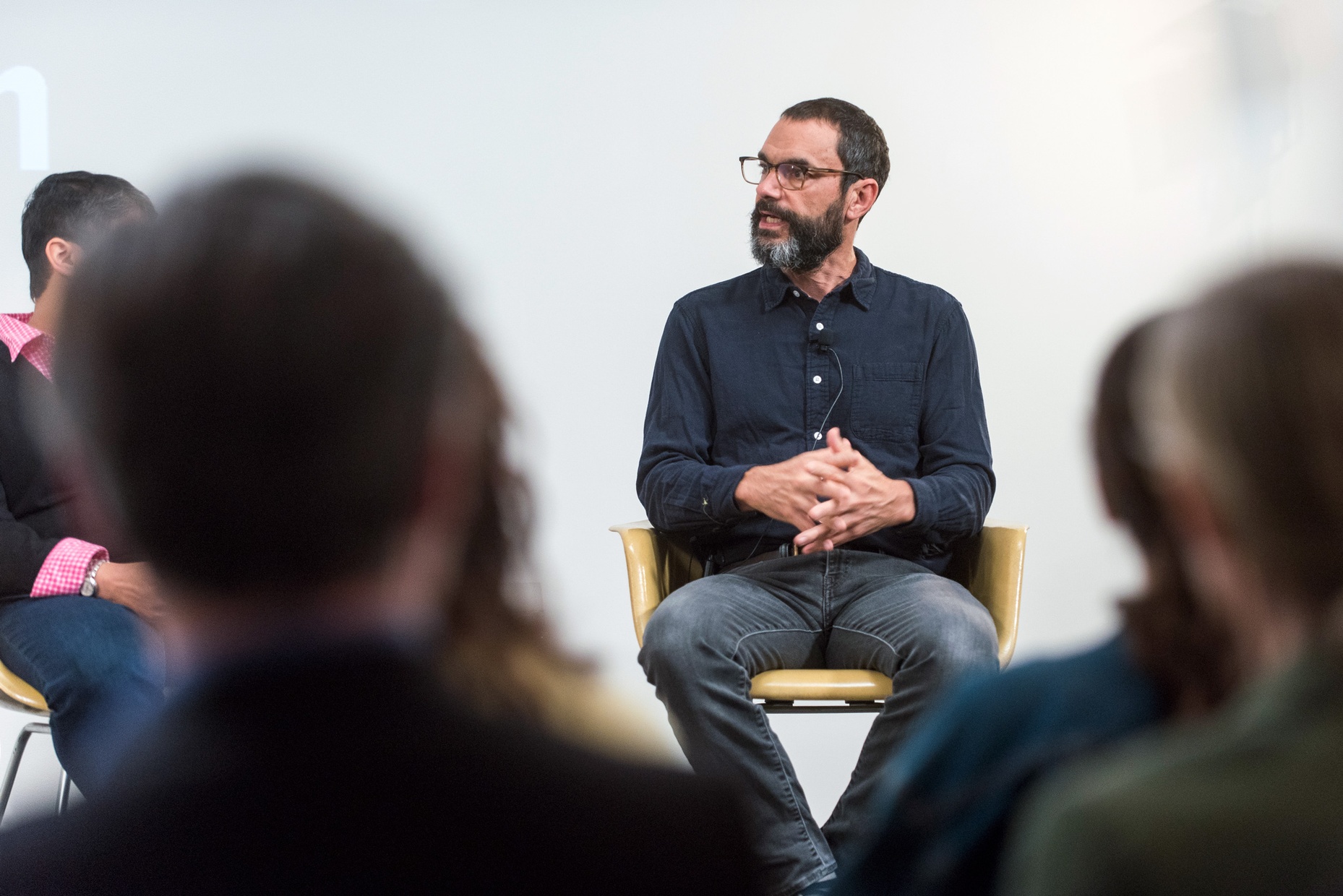 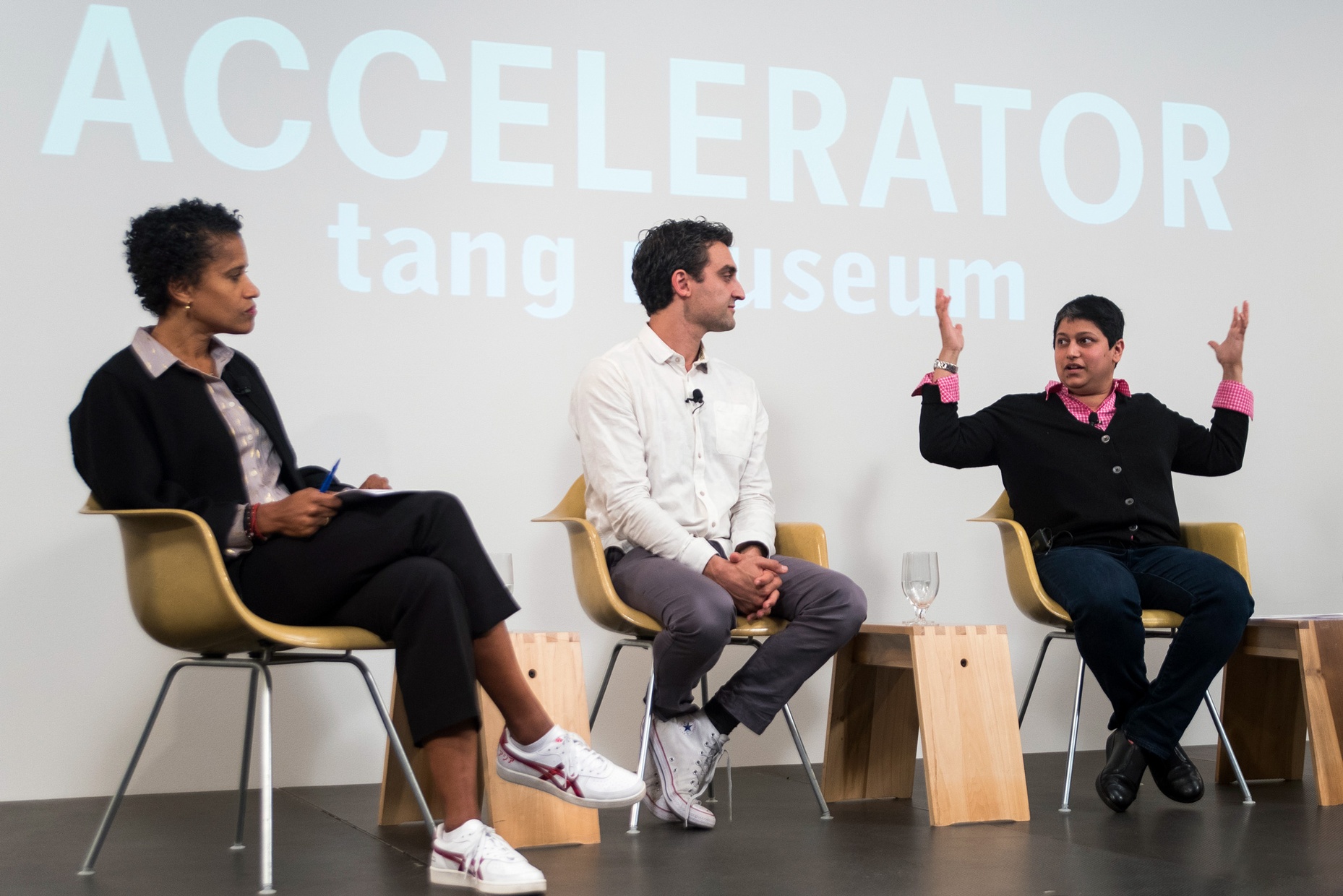 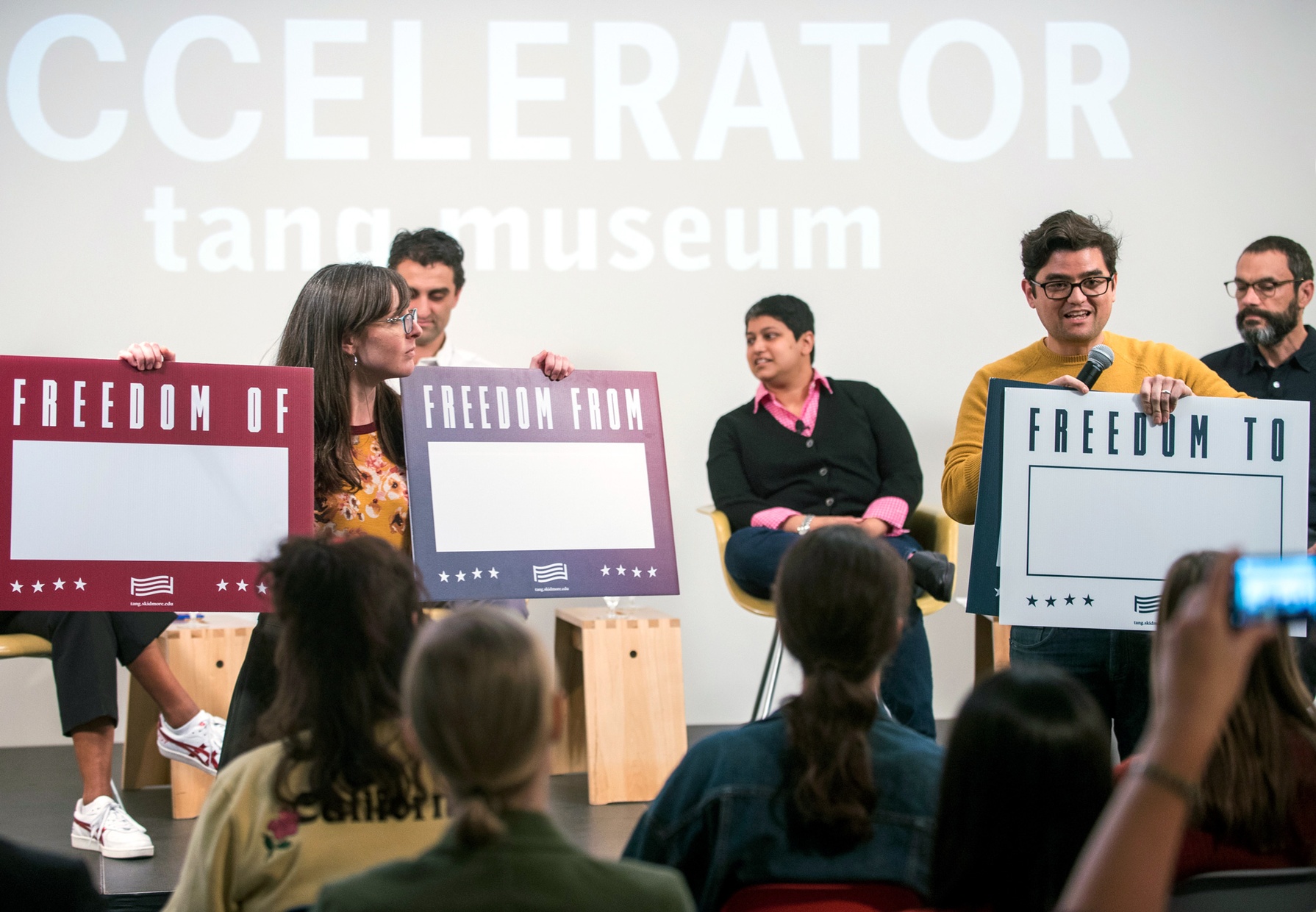 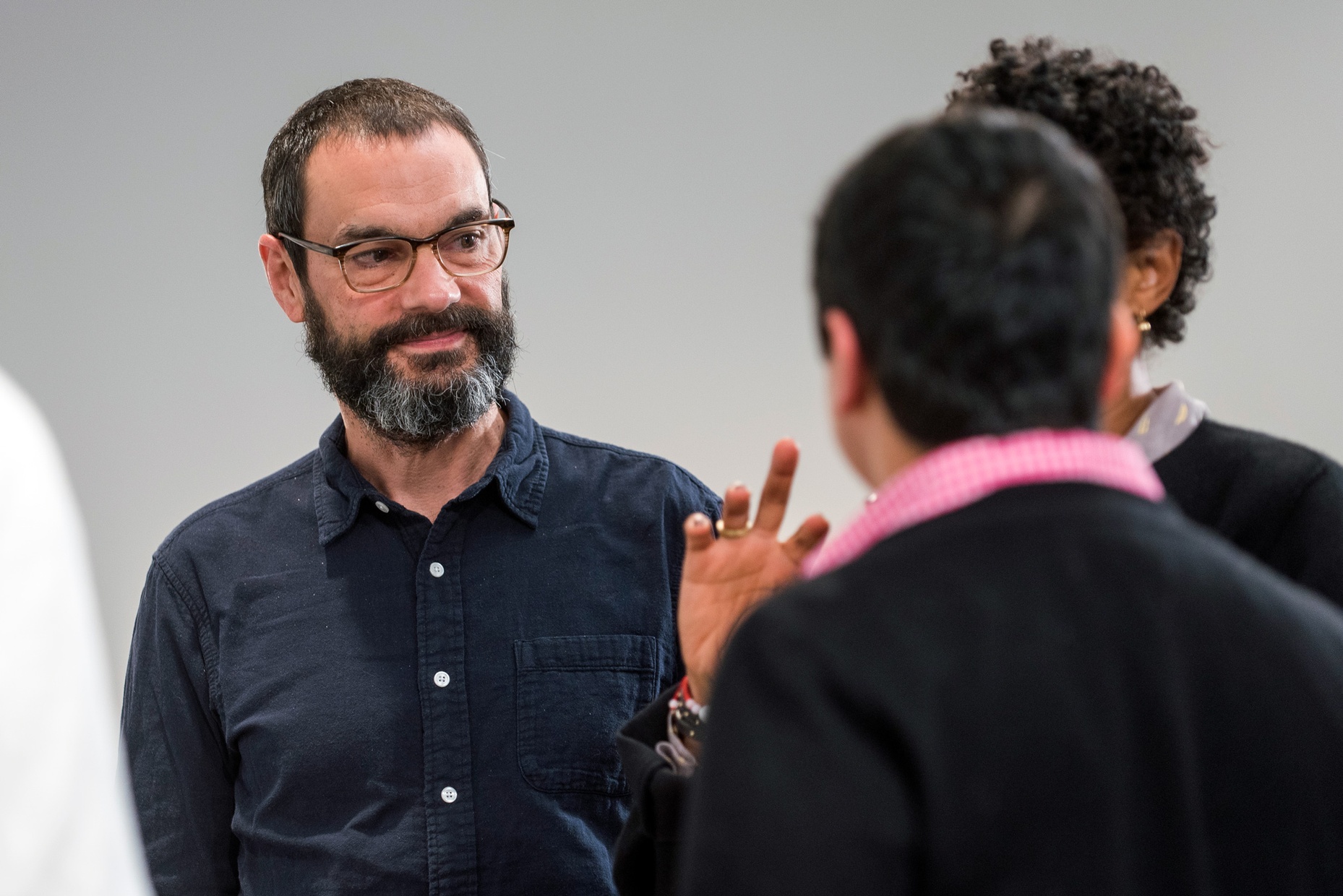 Accelerator Series: Get Up, Stand Up—Rights and Responsibilities of Citizenship, Tang Teaching Museum, 2018 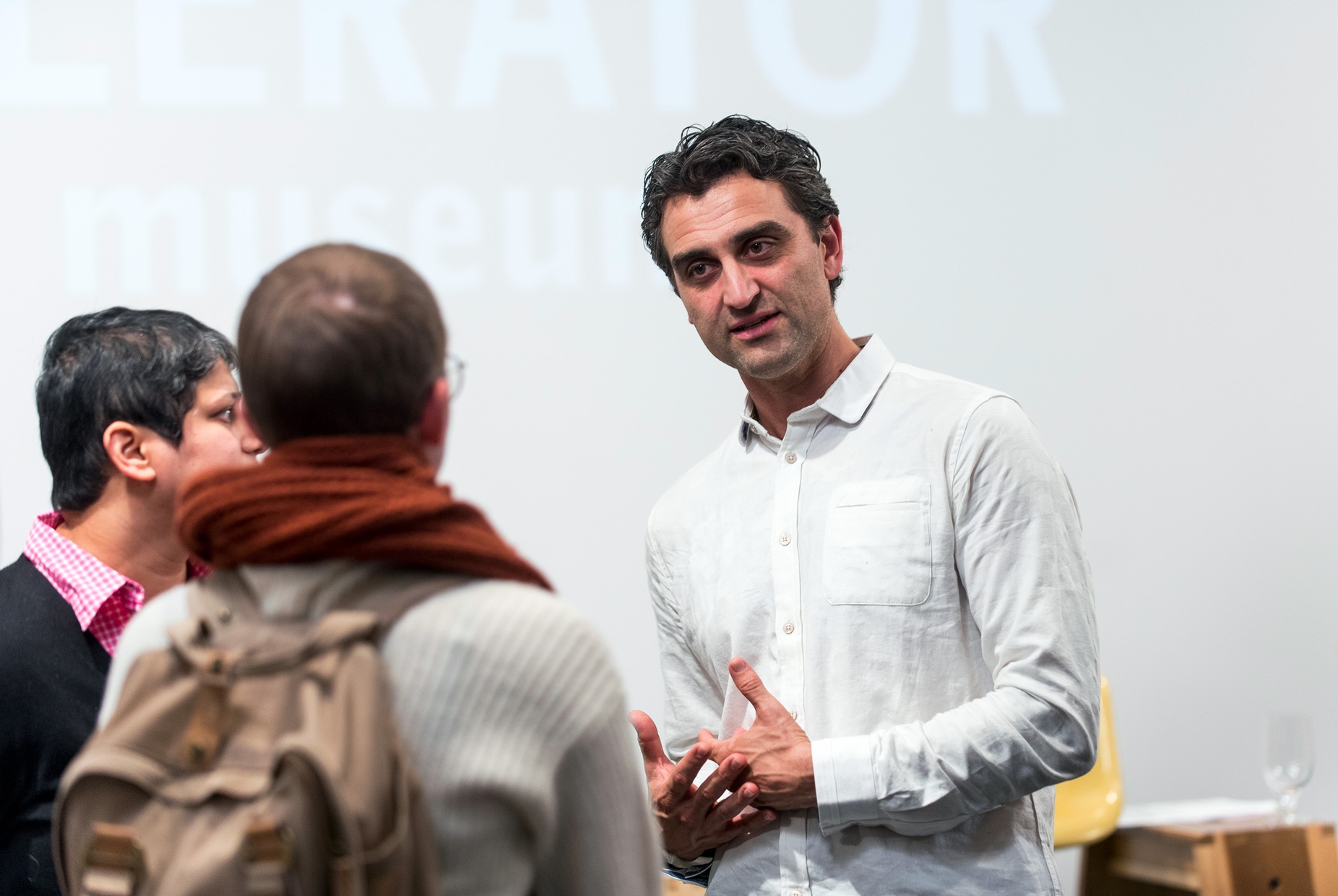 Give a damn.
Exhibition
i
Pattern by Jonnea Herman ’18
Inspired by the annual February Tang <3 Students Event
The Tang Pattern Project celebrates the Museum’s 20th anniversary. Organized by Head of Design Jean Tschanz-Egger, past and current Tang Design Interns created patterns inspired by the Museum’s exhibition and event history.
See all patterns